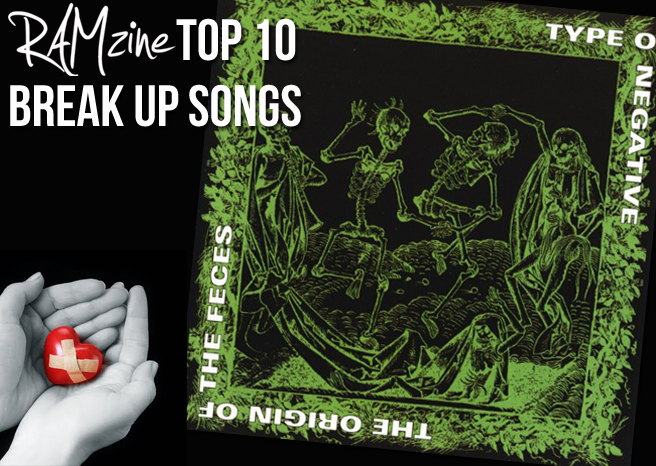 We’ve all been there huh? Maybe it was through a ‘kind’ face to face, perhaps it was a phone call or even worse a text but its safe to say that we have all been dumped. After the tears and begging comes the alcohol and then the long surveying of your CDs with that one song, the song that makes you feel better, not because it reminds you of them but because it reminds you of what a @#!$ they are! There’s no definitive list but this the ten best for me; the ten ‘I’ve been dumped and these dudes are singing my song!’

Courtney Love isn’t a great singer, and no one in Hole will ever set your world alight with their playing but my God can the girl growl! Yes there was that whole rumour that Cobain ghostwrote the entire album but whoever wrote Violet, Love sung it like a woman possessed. The driving guitar growls as Love screams lyrics like ‘Go on take everything, take everything I want you to.’ It’s a great song full of rage and self pity! Perfect.

The strength of this song is the shimmering guitars, quick up-tempo beat and Art Alexakis’ innate knowledge of melody (and smooth voice). Now listen to the song one more time and listen to the lyrics underneath it all. ‘You treat me like I am on fire/Like I’m something to eat/You make me hate what I see when I see me.’ So cool! The forgotten rock superstars of the 90’s Alexakis is the master of the swinging beat that will get you out of bed and stick in your head.

Mr Misogynist is ol’ Axl, he can veer from writing beautiful poetry to vile hate inspired anthems and ‘Back Off Bitch’ is up there with the latter! It’s a four minute simple pumping rock song with lyrics like ‘nasty ballbreaker/Stay out of my bed/Outta my head, if its lovin you/I’m better off dead’ – you know where he was when he wrote this one. The great thing about the song is it is actually quite a good sing-a-long, with Slash’s trademark wailing guitar and a huge chorus.

Before ‘Rollin’ came out and Fred Durst managed to alienate everyone they actually wrote some of the best Nu-Metal songs about. The whole of ‘Three Dollar Bill Y’All’ has elements of Durst’s obvious break up, but this is the most explicit and I think strongest. Its got some great jazz elements in it, Sam Rivers and John Otto are brilliant making a fantastic landscape for Wes Borland to splash with a cracking riff. The song builds to a might crescendo with Durst threatening and somehow still managing not to make anyone switch off with his self pity! Get your rage on!

[Editor’s note – I love Rollin’. Happy to own up to that]

1992’s ‘Broken’ EP signaled several changes in the world of rock: it was the beginning of the end for it bragging about excess and instead became the time of Generation X. Wish is a descent into Trent Reznor’s rage; fast paced and furious throughout, it was also the only song that I can think of that contains the lyric ‘fist-f*ck’ that actually won a Grammy… Violent and perfect.

Jay Gordon wrote the whole of ‘Candyass’ about his relationship break up and it sounds like one hell of an ugly, painful experience. There are some brilliant tracks combining Orgy’s love of Depeche Mode and crunching guitars. Lyrics like ‘stitch up my emptiness/Coz your the death of me’ are very simplistic and the epic feel of the song will help with all that crying in the rain.

Possibly a strange choice in the company of more aggressive songs, but the recording of ‘Rumours’ was fraught with tension as the couples within the band split and very publicly began sleeping with each other (meaning the fact they were was public, not the actual sleeping together), Silver Springs is Stevie Nix’s greatest lyrical and vocal performance, as she goes into the break down with Lindsey Buckingham. The end of the song features swirling guitars as Nix voices haunts the melody with lines like ‘Was I just a fool’ and ‘I’ll follow you down/’Til the sound of my voice haunts you.’

Written very personally, and containing some bizarre lyrics that can only relate to something that really had happened in Morissette’s life, I have put this one so high up for the soul baring, and the fact that it featured some of the funkiest grooves against these brazen, vicious lyrics. To be honest, anything that contains the line ‘And are you thinking of me when you f*ck her?’ has got to be high up. It was the high point for Morissette in terms of music and an anthem for the cheated on.

The second entry for Mr Reznor, and beats the classic Wish – why? It is pure hatred. Not just for himself, but for the person who let him down. Reznor has never written something so simplistic before, with it’s cranking acoustic guitar and classical industrial beat. The haunting and uncomfortable tune builds to a break with Reznor speaking clearly and then descending into a roar of ‘Like you said/Me and you make it through/Didn’t quite fall apart/Where the f*ck were you?!’

1. Type O Negative – I Know You’re F*cking Someone Else

Pete Steele, the late great giant, was an old romantic without much luck, but what he did do brilliantly is incorporate very black humour with great musicanship. This is the ultimate break up song because it goes through all the stages, the anger with the elements of thrash and harmonies on single words like ‘whore’ and the other one that we’re not allowed to write here, the agony with Steele’s mournful baritone easing the pain. Its a marathon of a song incorporating so much and is a great introduction into Steele’s world of loss and rejection.