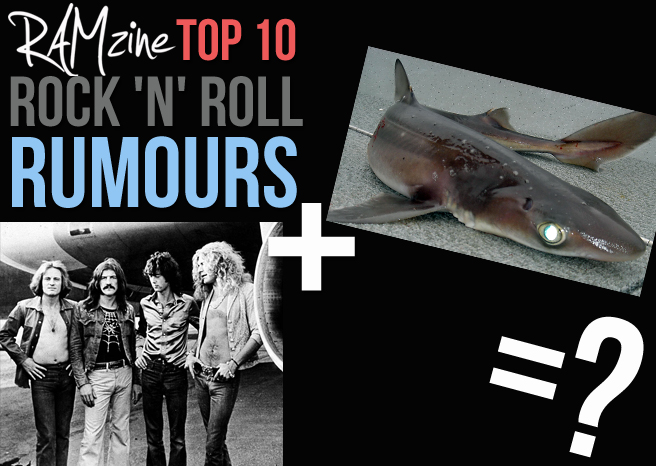 Everyone loves a good yarn, a good tall-tale, hey! Sometimes the myth is actually better than reality. Rock music is no different; it is choc-full of legends that people down the boozer love to regale you with but which ones are actually really true? Well people, here’s your chance to trump your friends with your awesome knowledge of all things rock. Commence the top ten rock myths…

10. Cass Elliot and the chicken sandwich

Seeing as this is a rock ‘n’ roll top ten, Mama Cass (as she was better known) enters with a long told tale. The spherical singer in the 60’s hippy legends The Mamas And The Pappas has long had the myth that she died whilst choking on a chicken sandwich in 1974. Seeing as Elliot was a bit hefty it’s easy to believe that she may have had a chicken sandwich loitering in the fridge, however the best singer of the group simply expelled via heart failure rather than sucking down one bite too many.

Cobain died in 1994, high on heroin, from a single blast of a shotgun, but some people claim that he was murdered due to him having

taken three ‘hits’ of heroin which would have made it difficult to handle the shotgun, a rather questionable suicide note, and his credit card being stolen. Courtney Love was at the mercy of a lot of these conspiracy theories as well as a few documentaries and friends claiming that he wouldn’t have done it. I side with the rest of his band, he was suffering from depression, had tried it before and was a drug addict. Add this to the fact that case was never reopened and it’s a suicide.

8. Robert Johnson sold his soul to the devil

One dark night a mediocre blues guitar player walked down a highway and came across a junction he didn’t know. Low and behold, the devil appeared before him and Johnson traded his soul in return for the mastery of the guitar. Sounds like a book or film huh? Actually this premise has been used for both, and although Johnson’s playing improved vastly in the three years he recorded, it was simply practice rather than a demon in his fingers.

7. Charles Manson was almost in The Beach Boys

The leader of the murdering cult and obsession of Axl Rose auditioned, and was almost part of The Beach Boys back in the 60’s. Now, Manson was an acquaintance of Dennis Wilson, and moreover a frustrated musician at heart, but when said band was being formed he was actual doing one of his stints in jail so this did not happen. On a side note though his music was covered by the whinging frontman of Guns N’ Roses in The Spaghetti Incident and its rubbish.

6. Marilyn Manson was in The Wonder Years before he was famous

Whilst I was growing up there was a rather moralistic show called The Wonder Years, where a prepubescent boy would go through life’s many challenges with the help of his painfully geeky, glasses wearing friend. Fast forward ten years or so, and Manson was shocking parents everywhere with his Satanic antics, BUT WAIT! The large nose and skinny frame… could it be that ‘Paul Pfeffier’ was played by Manson in a former career? Well, no. It couldn’t, because he was played by Josh Saviano.

Morrison was the breeding ground of myths, the snake hipped legend invited them, but is it true that he didn’t actually die fat and bloated in Paris, and there is actually someone else buried in his grave? Like most stories around Morrison – it’s a no. He did die drunk and depressed, and other than writing some incredibly pretentious rambling mystical lyrics, he did not kill someone and then have them buried.

The master widdler (like, guitar widdly, not… y’know… yeah) would apparently cut his own forehead and then wrap an acid infused bandana around it to make sure that during his solos he’d really go into Electric Lady Wonderland. To be honest, judging by some of Hendrix’s playing live and the fact that he would pretty much do what he wanted on stage, it’s easy to believe this one, but according to band members this was a very inventive legend. Shame!

3. Gene Simmons has a cow tongue attached to his own

I love this one. The Kiss bassist is famed for his rather large tongue, to the point that there’s even a Family Guy joke about it, so when Kiss broke out in the late 70’s there was a rumour going around that Simmons’ had recieved surgery to enlarge his tongue. Simply put, he went to a surgeon to attach a cow’s tongue to his own to make it really stand out when he did his waggling or had fake blood dripping down it. Firstly, this would have been medically stupid in any era, and had anyone actually bothered to look at it, you’d have quickly come to the conclusion it was all Simmons. It’s big but not cow big.

2. Stevie Nix, cocaine and her bum

Fleetwood Mac legend Nix was well known for abusing the marching powder but apparently at one time was so immune to it that the only way that she could get off was to…well… have it blown up her bum. Although Nix was certainly a Hellraiser it is almost medically impossible to have cocaine blown up one’s arse and actually live, so that one is 50 shades of bloody stupid.

1. Led Zep, the mud shark and the groupie

Not for the faint hearted!

In their pomp the lads from Zeppelin stayed in a hotel in the late 60’s which had fishing available in it. [Editor – what self-respecting hotel doesn’t?] They then caught a mud shark, found a groupie and gave her, err, a whole lotta love. Biology lesson here: if you’ve ever seen a mud shark up close you’d know that they ain’t a tiny fish, so physically it wouldn’t…well you know! So this, in all it’s grossness is not true.