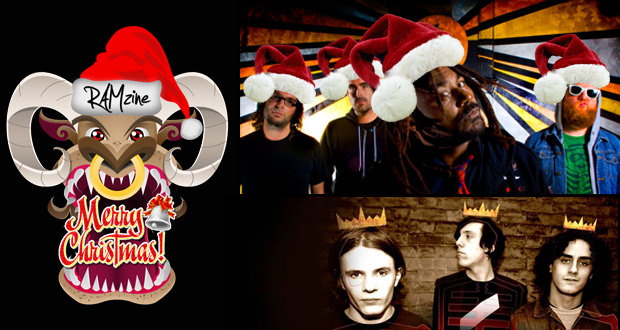 Sick of Slade? Wound up by Wizzard? Find Mariah mundane? If you’re looking for a an alternative to the usual Christmas cheesefests, the RAMZine team have picked out their favourite rock and metal Christmas tunes to guarantee a real rock and roll Christmas…

“This is my favourite, Skindred before they were very well known. It’s a rasta-metal-mix of Christmas awesomeness!” – Victoria Purcell, Editor-in-Chief

“One of the most underrated British bands to have ever existed, everything Reuben touched was absolute gold. This totally original riff-filled festive banger is no exception, and the easy singalong music video is one of the greatest things you’ll watch on YouTube this Christmas!” – Milly Youngman

August Burns Red – We Wish You a Merry Christmas

“August Burns Red are known for their covers, and in 2012 they released a Christmas album of them. This track shows perfectly what they’re capable of.” – Stephen Stanford

“A track that appears on their Greatest Hits album, it’s classic blink in their earlier days – goofy and catchy pop-punk with lyrics that are far from festive!” – Sam Rohde

“This one might start out with the familiar strains of Jingle Bells, but that’s about as traditional as this one gets. With a banger of a chorus, and entertaining lyrics that display Taylor’s apparent distaste for the holiday season, this is the perfect song for the Scrooge in the corner on Christmas Day.” – Milly Youngman

“Bad Religion have a whole Christmas album, and O Come All Ye Faithful is my pick. The best thing about it is the sheer irony of a violently atheist punk band doing quite respectable versions of conservative Christian hymns. It’s so much cooler than some ‘fuck Christmas – it’s all about consumerism and the religious establishment’ wank.” – Alex Reeves

King Diamond – No Presents For Christmas

“King Diamond’s No Presents For Christmas – making Christmas scary, which is what it needs really.” – Stuart Iversen

“I saw them play live at Hard Rock Hell – cannot get it outta my mind!” – Neil Mach

“Because it’s FUN! Great end of the night song at this time of year.” – Laura Phillips

The Vandals – Oi To The World