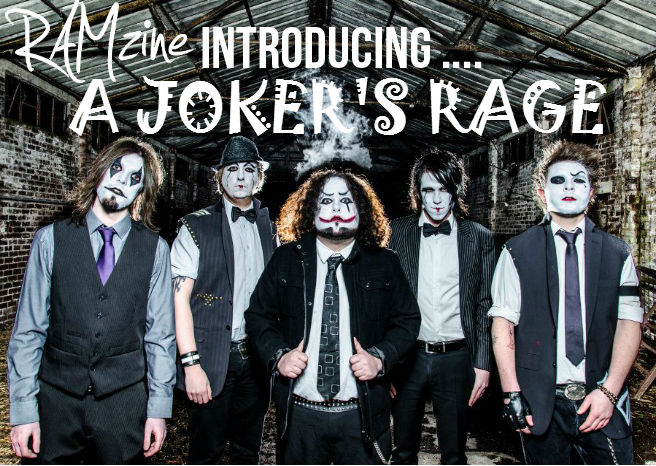 “This is not in vain, close your eyes,” quotes A Joker’s Rage singer Zakk Taylor at the start of their excellent 2012 EP “The Masquerade”. It may be a lyric, however it also aptly sums up what this band stand for. It’s not a vanity project by any means; it’s five down to earth guys making catchy rock music for the ears of the masses.

This line up was brought together in early 2012, and is comprised of Zakk Taylor on vocals, Adam G on lead guitar, Phil Morfitt on rhythm guitar, Geordie on bass and Matt Collinge on drums. Basing their stage show around spectacular controlled lights and Joker inspired makeup and stage wear, these really are a band to watch out for.

Based in the city of York, they honed their skills in separate bands before AJR, including Kid Ego, Breakout Degree and Testtone3, finally coming together to create a band which emphasises the “less is more” approach, yet there are avenues in their music which explores virtuosity, especially in the lead guitar and vocal performances.

“We’re just putting the romance back in the music really,”

“Myself and Zakk (vocals) have been friends for years, and we live together too, so it’s good we’ve got the band too.

I think we always wanted to be in a band that lives together, live to dream so to speak. We’ve been living together unofficially for years anyway, then it kind of just made sense to be in the same band, almost like it should have been that way from the start.”

Discussing the future, Geordie revealed the band have big plans:

“The future plans are just to get out to every place we can really and promote ‘The Masquerade’. Even further forward we’re planning a music video and eventually another EP; ‘The Masquerade Part 2′”

The future is looking bright for these clown-clad rockers. They wear their hearts on their ripped up sleeves and play some of the catchiest music heard for a long time. Check them out at