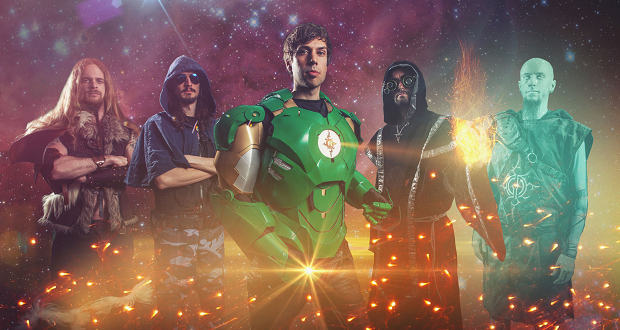 Swords and sorcery go hand-in-hand with OTT power metal, so it make sense that Anglo-Swiss power metallers Gloryhammer have such a devote following. Known for anthems like ‘Angus McFife’ and ‘The Unicorn Invasion of Dundee’, the five-piece have dropped the medieval armour for space-age superpowers. After a storming set at Bloodstock 2016, we caught up with drummer Ben Turk aka ‘Ralathor -the Mysterious Hermit of Cowdenbeath’, and guitaritst Paul Templing aka ‘Ser Proletius -Grand Master of the Templar Knights of Crail’ to talk about their new album, their influences and their fascination with the ‘future year’ of 1992.

So how did you feel your performance went this morning (Friday at Bloodstock)?

Paul: Really good, I’m surprised so many people got up to see us. I struggled getting up (laughs)

Ben: Exactly, I’m surprised we got up!

Paul: For someone who doesn’t have to play, just to watch us, it was really good! I’m pretty sure it’s the earliest I’ve played a show. Apart from when we played at 4AM that time but I would class that as ‘late’. If you haven’t been to bed, I don’t count it as ‘morning’.

Your new album has switched the medieval theme to a space-age/sci-fi theme – what was the thought process of the change?

Paul: Before we even finished the first album (Tales from The Kingdom Of Fife) we didn’t want to stick to the same theme.We imagined we would end up doing 10 albums about dwarves and orcs, and it would get boring. We get bored quickly. So we thought ‘where can we go next?’

Paul: It also confuses people, which is good. You want to keep people on their toes. You want people turning up not knowing what to expect every time. There’s so many influences to draw from space too like film soundtracks – Star Wars, Star Trek, you know. Join them with metal elements and make and you can do anything.

Ben: Well, when I was younger I watched a Gerry Anderson TV series called ‘Space 1999’ and when it was being re-run when I was 11…in 1999. And how funny it was this was meant to be the future in the ’70s. Then you get there and and you are sat watching it…you’re not exactly on the moon.

Ben: The future’s not arrived yet, Gerry got it wrong! So the next logical step was to set it in the recent past.  Although now 1992 is kinda cool.  When we came u with the idea, it was just long enough ago to be a bit naff.

Paul: Well I can remember the late 90s. Like before the internet.

Ben: People of our generation, that’s their earliest memories.

So what’s the fascination with Scotland?

Paul: Well that’s Chris [Bowes aka Zargothrax, Dark Sorcerer of Auchtermuchty – Glothammer keyboard player] own amusement. He grew up in that area, so he finds it funny writing about these … not very well regarded areas .. I guess…

Paul:Yeah, it doesn’t sound very fantastical, or a place of winder.

Ben: It would be like having ‘The magical kingdom of Derby’ or something. A place, which is fine but not very…well, it’s not like The Lord of The Rings-ish fantasy setting, is it?

Paul: It also ties in with traditional Scottish mythology. You had the Scottish unicorn, and  there is that type there. ‘The Unicorn Invasion of Dundee’ was just a few of us trying to think of the silliest concept imaginable. That was Gaz from Alestorm, who was meant to be in our band. Bet he is kicking himself now!

Will you ever re-visit the medieval theme?

Paul: No spoilers .. but maybe. We can always come back, wee can do ANYTHING we want to. We can make a jazz album (laughs). These are all ideas we have discussed

Ben: Many directions we could go in, depends how we feel like at the time. No definite plan.

(they both improvise a song together that goes: Bang…bang..bang…JAMES BOND)

Who else are you going to check out at the festival?

Ben: Twisted Sister, we already saw them last week at Wacken. It was very muddy so it would be a good environment where I’m not drowning in mud. And Wacken is huge. Although everyone singing ‘We’re Not Gonna Take It’ was awesome.

You can check out what we thought of Gloryhammer and many, many other bands at Bloodstock 2016 in our full review, coming in issue 10 or RAMzine (digital zine). For now you can check out our highlights:

Keep checking back for more interview from Bloodstock 2016