Back during Desertfest, we were lucky enough to grab ourselves an opportunity to catch up with Raging Speedhorn and see what’s going on in the world of RSH since we last saw them in December with guitarist Jamie Thampson (JT) and drummer Gordon Morrison (GM). Finding ourselves with beers in our bellies and hands, we stick ourselves in the heart of the Desertfest village directly opposite the outdoor bar of the Black Heart. Finding ourselves laughing as much as talking, everything seems to have a tongue in cheek vibe, and a great start to the day ahead.

RAMzine: So since the last time we spoke back in December at the Underworld, you’ve been locked away in the studio with Russ Russell, how did it go?

JT: That interview was with me weren’t it? That was me and Jim in the toilet!

GM: I remember nothing of that night…

GM: It was just the easiest time we’ve ever had in the studio, it’s just so weird that we’ve never worked with him before.

JT: Yeah, because we all know him, it’s pretty chilled out, there’s no stress, we can pretty much just play and throw out whatever we want.

RAMzine: So he wasn’t just a last resort then?

JT: Nah, nah. He was like our third or fourth choice or something! Haha! Nah, he was really our first choice.

GM: Well we didn’t know If we could afford him really, it was only in the end that we realised we could. We’ve known him for years and he lives in the same sort of town as us over in Kettering.

RAMzine: So the album, it was Pledgemusic that you used to fund it, was you expected as much support as you got through that?

GM: Uh no, it’s been quite mad and it’s still going now too, it’s been crazy. People are still pledging.

JT: It’s always a bit nail-biting ain’t it, when you put it up for pledge and you’re like, what if nobody gives a shit?

GM: Yeah, it just proves to you that you don’t really need any record label realistically now. People are there that like your band, then it pays for itself. It’s probably a worse way going through a record label, so if you can fund it yourself then why not?

RAMzine: Yeah, Black Crippled Phoenix have had to try and go down the same thing just because it is not financially viable any more…

GM: Yeah I mean we’ve been through it, on our last label we went through hell with it. Realistically, if this was around then, we’d of been better off doing it this way.

RAMzine: Yeah, I remember Iron Monkey had the exact same issue, who knows what could of happened.

GM: Yeah exactly, the labels are just there to fuck you over really.

RAMzine: So what’s the plans on release? Are you going to have a listening party or anything special? A little home town gig?

JT: We’ll have a little home town party, I think. It’s in the works, we might play.

GM: I think London’s going to be it, I mean we’ve got a tour coming up, so I think that last night is just going to be more like a party.

JT: I think that’ll be the official party, and then we’ll have a do with our friends and just you know. Sometimes it’s nice to have a party and none of the industry bullshit.

RAMzine: The past week you’ve had loads of announcements, download announced, your tour announced, Funeral For a Friend…

GM: Yeah that’s the thing with Speedhorn, we can get away with playing with other bands and other genres of music, we’re not just stuck in this (Desertfest) sort of scene, somehow we just seem to be able to bounce around quite nicely.

RAMzine: Yeah they (FFAF) were just coming up as you guys were already going weren’t they?

GM: Yeah. I work for them anyway, they’re our friends, you know like, Chris comes down to see us all the time. It’s just it’s wicked that we got to do that, one of their last ever shows and stuff, it’s awesome.

Ramzine: That’ll be something to remember. How do you prepare for things like this and gigs these days? Now you’ve all got families and stuff.

JT: Have you seen Frank?! Look at him!

JT: He has more kids than all of us! Haha! Nah it’s alright, we find time for it, I mean we’ve done tours before so we can do it, you just got to have understanding partners really that’s all.

GM: Yeah, I mean we’re trying to be a bit more professional and we go out with that thought in mind, but it never happens!

RAMzine: Yeah I completely get that, I like the idea of being an adult, I said today I was going to go sober, clearly that didn’t happen!

JT: I mean that’s the thing with us all! We all say we’re going to do that, we all go out saying we’re going to calm down a bit but it just never happens! It’s just who we are though, it’s just the sort of people we are, so, yeah.

RAMzine: Some things you just can’t change! So what’s next then after the tours?

GM: Well there’s talk of us sort of maybe trying to get a biggish tour support with a bigger, big band, but it’s, yeah….

RAMzine: You can get Orange Goblin surely?

GM: Haha, bigger than that!

RAMzine: Hahaha, pretty sure he might not know all his own stuff anyway!

JT: Hahaha, yeah, Don’t ditch us from the agency Ben!

GM: Haha, well there was talk of us doing that tour they did last year, but because we sort of had a tour coming up as well it didn’t really work out, but I’m sure something will happen. We’re just taking it as it comes really, and luckily its being coming along real well actually.

RAMzine: Haha it’s amazing what drinking in a pub can do for you really isn’t it!

JT: Yeah, we’re lucky enough that we’ve been around long enough so we know quite a lot of people in the industry, so we get together, these people are usually as bad as we are but they’re in decent jobs and they somehow like us so, yeah. Hopefully we’ll get on a bigger tour, next year I think we’ll be on more festivals and stuff because I think we’ve just missed the boat with most the festivals. I mean download’s going to be amazing.

JT: Yeah I can’t wait, we got told the other day that the only two bands that are playing at that time, all the other stages are closed, and it’s only Speedhorn and Rammstein, and we’re in the small tent, so it’s going to be mad. If Rammstein need us to swap though then we can do that.

GM: Yeah, yeah, yeah! I wouldn’t mind getting their fee!

JT: Haha, it’s more than I earn in ten years! That would sort me out for life!

RAMzine: Well to be fair, you’d drink it away!

JT: Yeah, haha. Well I would buy a golden top hat as well…and then fill it with booze haha.

RAMzine: Haha, so obviously you’re playing later, are you playing any of the new stuff, and more importantly, do you all know it all properly yet?

JT: I think Dave our bass player doesn’t know, but if in doubt you just play the open string though don’t ya!

GM: Well we didn’t want to play too many of the new songs, I didn’t want people there all with their cameras out and filming all the new stuff, so just a couple will do.

RAMzine: Are you guys checking out any other bands while you’re here? Crowbar being on straight after as well.

JT: I might go see Corrosion of Conformity, that’s a big, big part of my youth that is. Deliverance was when I was about 18 or 19.

GM: We have to go and see Crowbar, I’m going to try and get over there, we know the drummer quite well as well, we toured with them in America. Fun times.

RAMzine: Awesome, right well lastly, you did the Desertfest EP with Monster Magnet, was you expecting that?

GM: That was a weird one that, it just came out of the blue really. They got in contact with us.

JT: I mean obviously we’re always happy to help out a band like that.

GM: Well they know they needed a better band than they are, so we had to step in and help them out!

JT: Hopefully the next time they play the UK there will be a better crowd for them now, and if they’re up for it, well…

GM: What, them supporting us? Well, yeah why not? Haha!

GM: Well they don’t drink any more so we can have their rider too.

Soon after, the dominating Ben Ward joins us, and unlike Raging Speedhorn being very quiet about any possible support slot coming up with a real big band, Ben almost instantly spills the beans about it and the likelihood of it happening. Hopefully all will be announce soon! 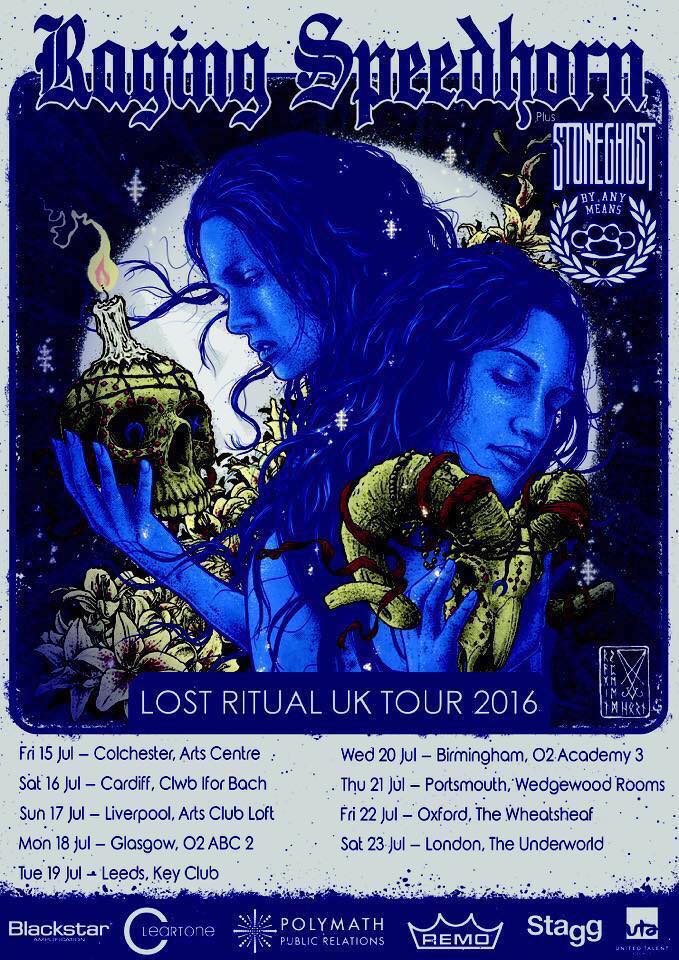