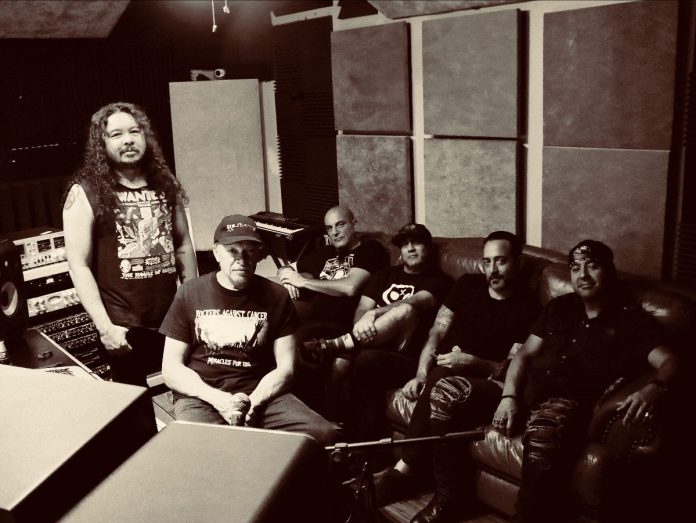 Los Angeles metal stalwarts Attack Of The Rising has released their latest single, “Eyes Closed” ahead of their forthcoming album, Game Changer, to be released on 30th July through Weapon Records/Vanity Music Group.

Directed by George Mitchell, executive produced by Chris Lepre and produced by Tony Lepre, the band decided to change things up for the accompanying video that you can see here at RAMzine

“We had done two heavy videos in terms of concept and we wanted to lighten things up and show the other side of the band,” said guitarist, Tony Lepre.  “We decided to parody some classic 80s metal videos, some 90s hip hop videos and even some TV show reference. It was all about fun. Chris wanted to include the in the studio aspect/visual as well.  The studio is ‘on the boat movie magic” with Bill Metoyer producing us. Pretty much the entire concept came from Chris’s creative vision.”

As for the song itself, “this is the first one we all wrote together,” said drummer Chris Lepre.  “Musically it all came together rather quickly but lyrically we went into a dark, sombre place. At that particular time, a number of public figures and people in our personal lives had committed suicide and we wrote about that: the experience of wanting to commit suicide and having known someone who has done so.”

With their musical roots firmly planted in the classic metal of the early LA metal scene, Attack Of The Rising add a modern metal touch to their approach, helping to drive their point home musically. The Lepre brothers, Tony (guitars) and Chris (drums) grew up in Los Angeles and were a part of that early 80’s LA scene while guitarist, Billy Sablan and bassist Mike Risucci both grew up in New York and were influenced by East Coast thrash and the exploding Bay Area metal scene.

Tony Lepre said, “We all are influenced by such bands as Testament, Death Angel, Metallica, Armored Saint, Metal Church as well as Iron Maiden, Judas Priest, and classic Deep Purple. From 70s prog rock and proto-metal bands to classic 80s metal we take all our influences and make them our own”

The band started tracking drums as early as early summer 2019 after working on the material for what would become the new album for about two years.  And, in fact, second guitarist Billy Sablan (ex-Rude Awakening) and bassist, Michael Risucci joined while the album was being written.

“’On the Horizon’, ‘Burning Daylight’ and ‘Island of Seven Skulls’ were demos I had sent to Michael and then he sent to Billy, in fact,” recalled Lepre. “So, those songs became a part of getting these guys into the band.

“I’ve known Bill Metoyer for some time and Chris and I originally discussed recording with him in summer of 2018,” Lepre continued. “After the first show with the current line-up, Jan 2019, I spoke to Bill (who was in attendance) and basically said something like, Ok let’s fucking do this! He was smiling and said you tell me when. The band had pre-production rehearsals and wrote ‘Eyes Closed’ and reworked/arranged ‘Opus X’ and ‘Voodoo’.

“We scheduled Chris to lay down drum tracks at GailForce studios Friday June 28th, 2019 and he had finished all ten songs down by that Sunday afternoon. It was very laid back, no pressure, and the best time ever recording according to Chris. Then we booked the rest of the tracking. I wanted Billy to play rhythm on this album as well as myself, to give it the live vibe and presence of what AOTR is with these guys in the band. I knew it was not the norm, but I wanted to give that and bring that. From mid-July through end of October the band put down their respective parts.

“It was all warm and smooth and no pressure to record with Bill Metoyer. It’s like hanging out with an old friend having fun. Throughout November, Mandrake came in and did his vocals. Effortless and mind-blowing process to experience. Bill started mixing at the end of December… Then 2020 came around. In August of 2020 Bill started mixing again and here we are.”

The official video for previous sinlge ‘On the Horizon’ can also be viewed here at RAMzine, and can be purchased on Apple Music and streamed on Spotify. Previous single ‘Opus X’ can be downloaded here and previewed on Spotify.

“Bill Metoyer brought out the best in each of us and gave us the no stress recording atmosphere to make that happen. Having Bill at the helm of this recording has made it what it is for us – Loud, hard and heavy,” said Lepre.

on 1st July, Attack Of The Rising took to the stage for the first time since the pandemic hit, playing to a packed house in Anaheim, California. “The band was a killing machine last night,” reflected guitarist, Billy Sablan, “You could feel the frustration of the past year and a half pour out of us in a positive way.  And the crowd ate it up.”

“It was glorious, said Tony Lepre.  “We were on fire. My brother Chris’ drumming was vibrating the stage and just the energy coming off of that stage was undeniable. !  It was amazing across the board.  When do we get to do this again??”

You can purchase “Eyes Closed” on iTunes and stream it on Spotify.