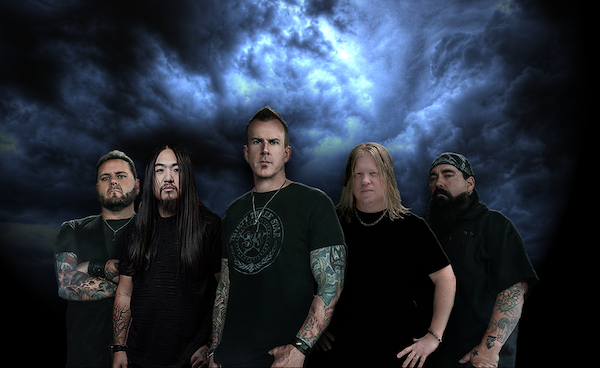 US rock band Farewell To Fear has released ‘Powertrip’ as the latest single from nalbum Polarity, out now on Crusader Records.

the siingle is described as a “banger” that has “a unique blend of classic thrash and modern active rock. Lyrically the song touches on the being caught in the grip of those with on a power trip.

You can check out how true that is by listening to the video here at RAMzine.

Polarity itself pulls its roots from a variety of rock genres sending the listener on a rollercoaster ride. Heavy, melodic, raw, nostalgic, thrashy, gritty, emotional and angsty are just a few of the words that have been used to describe this album.

“The gloves came off when we started writing Polarity, no rules, no formula. We wrote what we felt and what moved us in the moment. Lyrically, the album draws on many emotions and feelings that we all have shared over the last crazy few years, and as true to form, a message of positivity and hope in the darkest of times,” declared the band.

Tracks featured on Polarity are: ‘Powertrip’, ‘Brainwashed’, ‘Played Again’, ‘If Tomorrow Never Comes’, ‘Weight Of The World’, ‘Fall In Line’, ‘Forgive It All’, ‘Falling’, ‘Crash And Burn’, and Faith No More cover ‘Surprise! You’re Dead!’.

The album is available here.

Born out of the huge black hole that mainstream rock radio left during the absence of super rock stars like Metallica, Alice in Chains and Soundgarden, the band revisits an era with big rock riffs, big choruses and huge anthems for a new generation of rockers.

As well as landing them at #1 on Amazon’s Hot New Rock Singles chart and #8 on iTunes Rock chart, their debut album also earned them direct support from Howard Stern, including the rarest of moments on Stern’s show…Aairing an entire song as opposed to the normal 20 second snippet he usually shares. That track, ‘Diamonds’, recently eclipsed 2.4 million streams on Spotify.

Inspired by the overwhelming success of New Blood, Farewell To Fear released their Legacy EP, ultimately allowing them to merge their skills and styles together to create heavy rock songs that deliver a strong punch to the gut, while staying melodic and delivering impactful lyrics.

Farewell to Fear is poised for an explosive 2022, the band has signed with Golden Robot Records already been invited to perform at the Rebel Rock Festival in Orlando, USA, with Five Finger Death Punch, Limp Bizkit, I Prevail, Sevendust and many more.

Previously the band has released the singles ‘If Tomorrow Never Comes‘, ‘Played Again’ and ‘Falling‘ and you can check out the videos available to them right here at RAMzine.

‘If Tomorrow Never Comes’ is a song that is said to hit home for all of us at one time or another.  As we reflect back on our lives, we contemplate the choices we have made, the chances we didn’t take and the pain of regret. This hard-hitting anthem is a huge wake up call, we only have one life to live, let’s make it count! You can order it here.

‘Played Again’ takes the angst and experience of feeling used and channels it into a fist pumping anthem. Slashing guitar riffs compounded with Mike Craig’s Pantera-esque vocals punish the listener. The single is available here.

‘Falling‘ touches on the downward spiral of depression and shows the perspective of a new generation trying to make sense of it all.  Everyone falls victim to darkness and depression; ‘Falling’ delivers the message that you are not alone and this feeling won’t last forever.The track features a powerful vocal melody, heavy riffs and duelling guitar harmonies on top of a thundering rhythm section with a slamming groove and massive production. ‘Falling’ is available here.

Their previous single to that, ‘Brainwashed’ has lyrics that are intended to have a deep meaning that should resonate with listeners. The song features heavy grinding guitars and a thundering rhythm section, coupled with haunting spine-tingling vocal melodies.

You can order ‘Brainwashed’ here and watch the video for that song here too.

You can also hear Farewell to Fear on Spotify here.