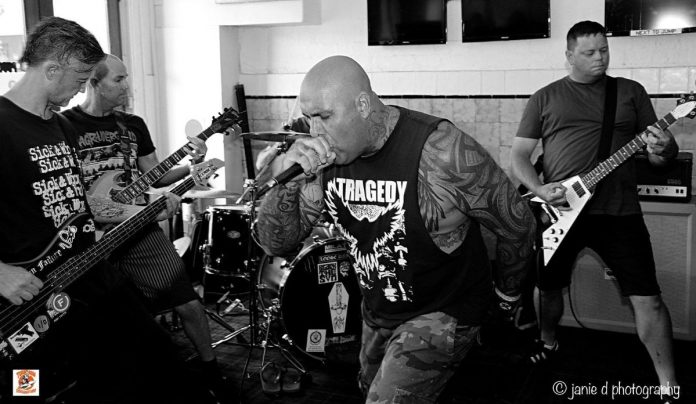 Human Failure is a hardcore, punk, crust, metal band from Newcastle, Australia. Spawned out of the scummy streets and, apparently, members originate from some of the most scumbag bands to hit stages up and down the coast of Australia.

The music is fast, in your face, screwed-up, full-throttle hardcore that will “put you on your toes till you lose all self-awareness”.

Together a  few-years now, but with a defined membership of full-on doom lords and scum bags, following on from a series of internationally released singles, they have both an EP and new single out, both called Urchin, out on Riot Records.

The title track and single is about a good friend who passed away, but as they note: “This isn’t a ballady tribute to Donny, this is hard and fast punk!”

The Urchin EP begins with a flat-out, hardcore, short and fast blast that’s done in 30 seconds – starting the EP with a bang and giving a taste of what’s to come. It then opens up to more melodic and metal flavours, ending with driving hardcore punk and more melody.

Previous single releases include ‘Kick It’, that has been described as ”a furious and brutal short burst of thrashy, crusty, metallic hardcore.”

“This track is about humanity’s problem with suicide and have and have nots. It’s crappy how society treats each other as a whole. The high amount of youth suicide that happens every day, no matter what your background is,’’ said the band.

Human Failure followed that up with ‘Barbed Wire State, described as a grinding, intense, angst ridden blast of Metallica hardcore. The song about how limited they are both in their state and as a country with their freedoms.

You can order ‘Kick It’ here, ‘Barbed Wire State’ here and Urchin here – And watch the video for it right here at RAMzine.