In The Whale’s Vanishing Point & UK Dates with Evil Scarecrow 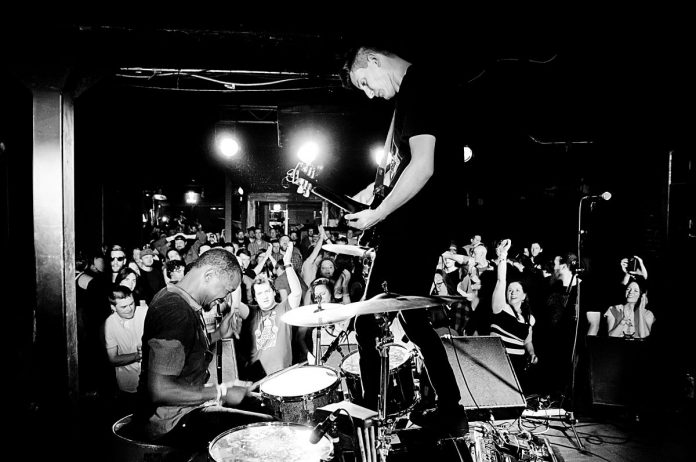 Vanishing Point is the first album release on Riot Records for Denver, USA heavy alt-rock band In The Whale and will drop digitally on 22nd October.

It will be out in time for when the band cross over to the UK to support Evil Scarecrow on that band’s national tour.

Produced by Steve Evetts at the Foo Fighters’ Studio 606, seven songs were recorded live in the studio to tape, and the rawness and intensity is said to reflect that fact. With lyrical themes spanning from bullying to suicide to gentrification, Vanishing Point is the bombastic power duo’s most ambitious recording to date.

‘Crosses’ – “A song about looking yourself in the mirror, realising you’re going to die one day, and wrestling with that fact. The fast paced, high intensity of the instrumental reflects the lyrical content of life flying by at a frantic pace”.

‘Jeffrey’: “Written from the perspective of someone trying their hardest to be normal, yet knowing they aren’t, deep down. The staccato guitar rhythms and big open choruses make this song one of the fiercest on the EP.”

‘Smoke Break’: “About suicidal thoughts and depression. It’s about what happens when those feelings are not dealt with and come to a head, with the main character saying, ‘today’s the day.’ Dedicated to the people the members of the band have lost to suicide, ‘Smoke Break’ is possibly the most personal song the band has ever written”.

‘Drug Dealer’: “Works with the pharmaceutical industry and how many of us are being sold an addiction to a prescription drug, rather than an illegal drug and the lines that blur in-between. The song climaxes in the bridge with a slow breakdown, mimicking a real-life breakdown.”

‘Antlion’: “About the very real gentrification happening in the band’s hometown of Denver CO, but also all over the United States. The lyrics are from the perspective of the gentrifier who seeks to take whatever they want by any means necessary.”

‘Edge Of The Earth’: “About how the world may be lost and falling apart, but there is still always an opportunity to start again. This is the slowest song on the EP, but never loses its intensity.”

‘The End’: “About the band’s frustration with the current state of society, the world and how sometimes we just want the whole thing to end. Culminating with a blistering off time breakdown, it’s the perfect ending to the EP.”

You can pre-save/order Vanishing Point here.

EVIL SCARECROW UK TOUR DATES WITH IN THE WHALE