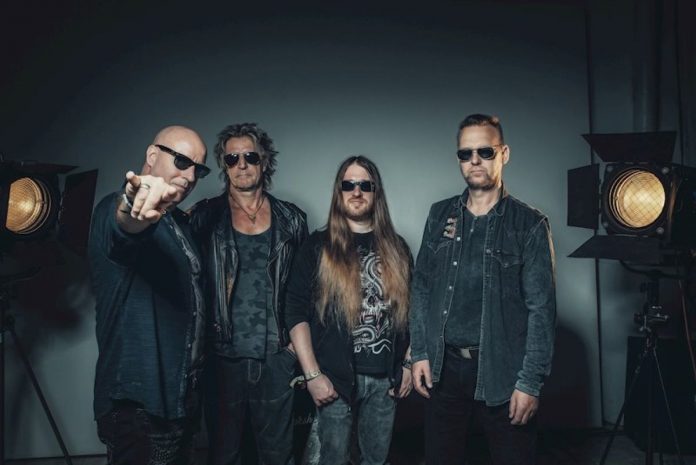 In 2017, German power metal act Iron Savior started a special project: Their first five studio albums were no longer available at that time but the band could not simply rerelease them for legal reasons, so they decided to re-record some highlight tracks of the Noise Records years. The result, Reforged – Riding On Fire, was received positively throughout and made the fans ask for more.

Many tracks weren’t selected for a rerecording at that time due to capacity reasons and it quickly became clear there was demand from their fans. To that end, the double album Reforged – Ironbound (Vol. 2) will be coming out on 26th August via AFM Records, and to celebrate this they’ve released a video for the rerecorded version of ‘Solar Wings’, that you can check out here at RAMzine.

“This time we picked 23 songs, which is significantly more than the first ‘Reforged’ part had”, said bandleader Piet Sielck. “The very positive response to Reforged – Riding On Fire made us consider a second part. Through direct fan feedback, we then also became aware of how many songs were still slumbering there, which deserved to be suggested for a remake.

“I am very satisfied with the result,” Sielck continued. “It’s always up to the fans out there to evaluate something like this, but in my opinion our second part of Reforged surpasses its predecessor. It was great fun to approach the songs again.” Smiling he continued:”I’m especially happy that both Jan and Piesel as well as Kai (Hansen) were able to play or sing their original parts. And with the guest solo by my godson Tim Hansen, the whole thing has somehow become a cross-generational family album.”

Reforged – Ironbound (Vol. 2) was again produced by Piet Sielck himself in his Powerhouse Studio, and features the tracks: ‘Children Of The Wasteland’, ‘Protect The Law’, ‘Starborn’, ‘Deadly Sleep’, ‘Forces Of Rage’, ‘Brothers (Of The Past)’, ‘The Battle’, ‘Unchained’, ‘Seek And Destroy’, ‘Solar Wings’, ‘Made Of Metal’, ‘Predators’, ‘Firing The Guns’, ‘Back Into The Light’, ‘Ironbound’,  ‘Paradise’, ‘Thunderbird’, ‘Tyranny Of Steel’, ‘Riding Free’, ‘Starchaser’, ‘Living On A Fault Line’, ‘Crazy’ and Eurythmics cover ‘Sweet Dreams’.

The double album can be pre-ordered here.