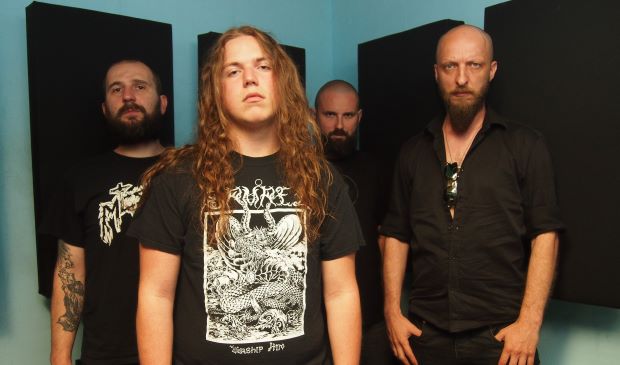 Death metal act Kult Mogił return after nearly three years, and following the release of mini-album Portentaque will bring out Torn Away The Remains Of Dasein on 6th June through Pagan Records.

Recorded with a new line-up, and now featuring a couple of chaps called Deimos on vocals and Rzułty on guitars, a new energy was generated, directing the band towards a more classic death metal sound, if not in an old-school 90s style.

“Instead of following trends of fashionable playing, we’re heading in the opposite direction, going back to the roots of death metal even more than before,” the band commented. “This is our most essential recording, devoid of layers of sludge and other popular additions from previous releases. We want the new songs, stripped of these ornaments, to defend themselves with strong, load-bearing riffs.

“This album is 100% devoid of the desire to be avant-garde or experimental. We are destroying the previously developed formula so that we can on its ruins pay homage to the classics of the genre.”

Tracks featured on Torn Away The Remains Of Dasein are ‘Hunger Of Pride’, ‘White Death Implosion’, ‘Torment Of Dasein’, ‘Idols in Blood’, ‘A Wax Reverie’ and ‘Fountain of Affliction’. The album will be available on CD, LP, an in digital formats along with a new T-shirt via Pagan Records, all available for pre-order.

The first single ‘Idols In Blood’ is out now and you can watch the video for it right her at RAMzine.