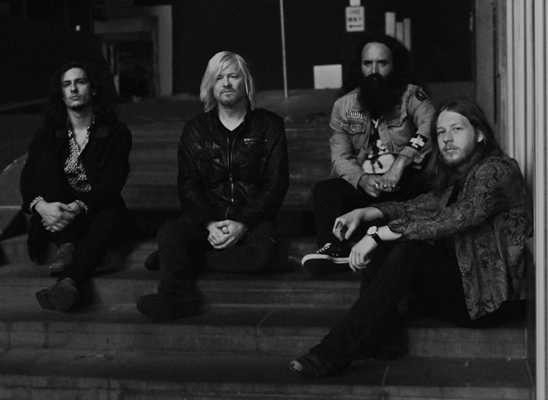 Palace of the King  have just released ‘I Am the Storm’, their second single from their new album Get Right With The Maker due out on 23rd March through Golden Robot Records.

The full track listing for  Get Right With The Maker has now been revealed as ‘I Am The Storm’, ‘It’s Been A Long Time Coming’, ‘Sold Me Down the River’, ‘A Dog With A Bone’, ‘Said the Spider to the Bird’, ‘Move Through the Fire’, ‘The Serpent’, ‘Horizon’, ‘Fly Like An Evil’, and ‘Back On My Feet Again’.

Formed in late 2012, Palace of the King, have become known for their bluesy, soul-infused, riff-heavy, psychedelic rock n roll.  Get Right With Your Maker is the band’s third full length album and fifth release overall. It was recorded in multiple sessions around touring commitments, with life on the road having become part of the DNA of Get Right With Your Maker lyrically and musically.  It was mixed jointly by Machine (Clutch/Crobot) at The Machine Shop in Texas and Liam Jenkins at Somedays Studios in NYC.

Get Right With The Maker can be pre-ordered on CD, vinyl and digitally by clicking here.

‘I Am The Storm’ and previous single ‘It’s Been A Long Time Coming’ are available  instantly when pre-ordering the digital album via iTunes or the CD or vinyl edition via the official store.

For more Palace of the King news at Ramzine click here.