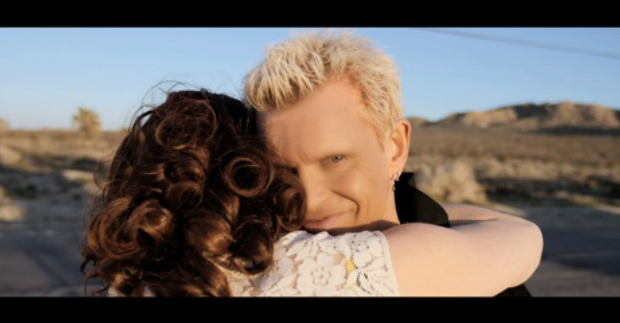 Billy Idol has released a new video to accompany his current single, ‘Save Me Now’, an electro-rocking highlight from his recent critically acclaimed album Kings & Queens Of The Underworld, co-written by Idol, Twin Shadow, and Greg Kurstin.

Known for his striking and compelling videos, the multi-platinum British rock icon headed to the California desert with his longtime guitarist and collaborator Steve Stevens to film the video that was directed and conceived by Thomas Kirk (who has worked with Muse on multiple videos).

The clip follows a priest and a police officer on a wild ride set against the stark, desolate California landscape, accompanied by a leading lady entwined in the drama. In describing the video, Kirk said:  “I went for a concept which very much took the lyrics of ‘Save Me Now’ and turned them into a surreal story that I felt was as true to the very visual lyrics as possible. I loved the image of a bruised cop and a priest trapped inside a car.”

Meanwhile, Idol continues on his Kings & Queens Of The Underground Live 2014-2015 world tour with North American dates until June 4, followed by another run of shows in Europe this summer.  He will return to the U.S. from August-October for a mix of solo shows and festival appearances.

You can view the video for Billy Idol’s ‘Save Me Now’ below: