The Owen Guns… Is this Punk? 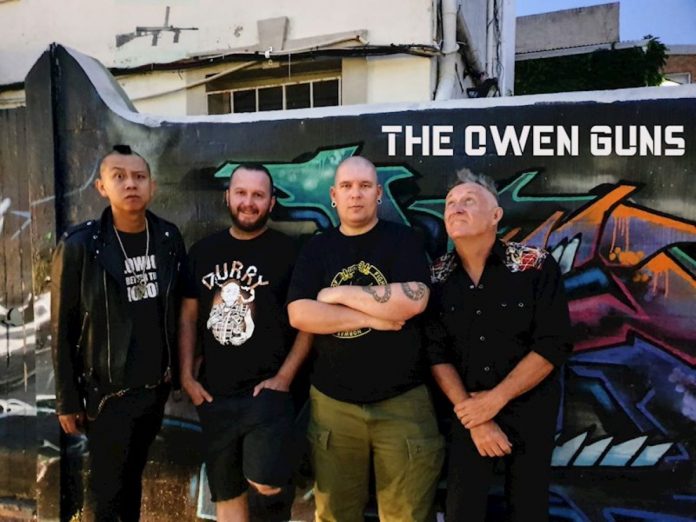 Hardcore punk band The Owen Guns dropped their Violating Community Standards EP back in August last year and the controversial (albeit tongue in cheek) band caused quite a stir.

Now their second EP Electric Boogaloo is out via Riot Records, the band having been previewing a series of singles. The latest being a fist-pumping sing-along punk rock tune, inspired by the age-old question asked on every punk rock forum on the internet: ‘Is This Punk?’

The answer from The Owen Guns is…No one cares! If you have to ask, you just don’t get it.

You can listen/buy the new single here and watch the video right here at RAMzine.

Prior to this, the first single out the bag was ‘Sick’ in February.

‘Sick’ is a punchy little number that’s apparently “dedicated to the morons who thought it was a good idea to stockpile toilet paper during a pandemic”. Co-written by Adam Check of Toe to Toe/One Dollar Short it pulls no punches.

They followed this up with ‘Out Of Time’ in April and you can watch the videos to both singles right here at RAMzine.

Based in New South Wale, Australia  although they’re a relatively new band, The Owen Guns are made up of veterans of the live music scene, having paid their dues playing not only in Australian bands but also in the case of their vocalist and drummer in Canada and China respectively.

Forthcoming EP Electric Boogaloo was recorded and mixed by Geoff Mullard at RTN studios and mastered by Jason Fuller at Goatsound. The record features seven tracks ranging from furious to funny, blending old-school hardcore with sing along punk rock and adding a metal edge.

Full of blazing solos and group choruses – There’s never a lull from the onslaught of punk rock yet the band even have time to show their “sensitive” side with a faithful cover of The Hard-ons’ Aussie punk classic ‘Just Being With You’.

Raw and raucous you can order ‘Sick’ by clicking here, ‘Out Of Time’ here, and  Electric Boogaloo here.