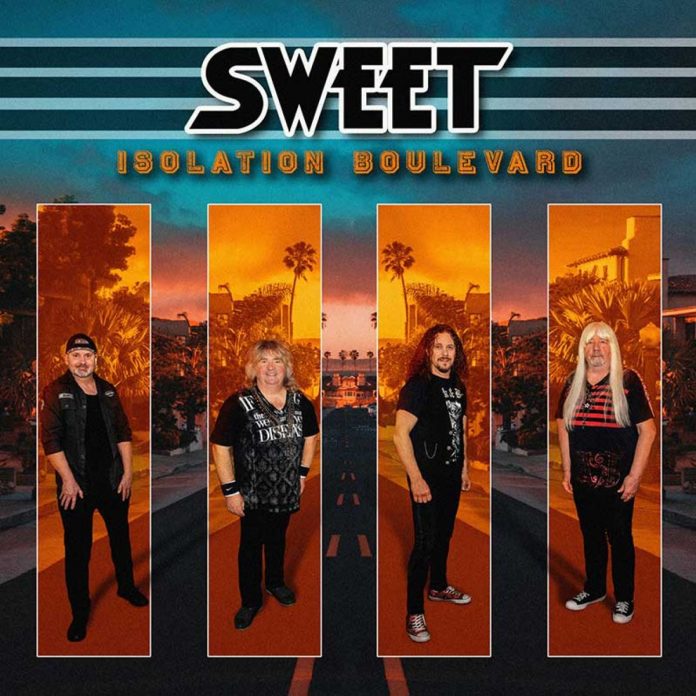 A British rock & roll institution with 50 years of hit singles to their name, Sweet has sold 55 million albums and had 34 number #1 hit singles – Ranging from bubble-gum to glam and hard rock with an Ivor Novello Award nomination thrown in for good measure.

Hailed by many as a national treasure with a loyal fanbase, their impressive arsenal of rock music has stood the test of time. The music as fresh and exciting as it was 50 years ago when Sweet first stormed the UK Charts in January 1971.

Of the classic 70s line-up, vocalist Brian Connelly, drummer Mick Tucker and most recently bass player Steve Priest have all passed on. Sweet guitarist Andy Scott, however, has led the band for many a year and at the tail-end of 2019 gathered a line-up that’s been gathering significant critical acclaim despite coming into existence just as the coronavirus pandemic was about to rear its ugly head.

Alongside Scott remained long-standing drummer Bruce Bisland, a man who began plying his trade during the News Wave of Heavy Metal days, and has also performed in such bands as Praying Mantis and  Statetrooper. They were joined by Lee Small, on bass and backing vocals; no stranger to the record industry have recorded over 20 albums worldwide with the likes of Shy, and more recently Lionheart alongside three solo albums of his own. The final piece of the jigsaw was vocalist Paul Manzi who had actually deputised for the band on keyboards/guitar for an Australian tour in 2014, having already established himself as a member of progressive rock band Arena, and in more recent years as front man for Cats In Space.

With touring on hold, during national lockdown between September and October last year, Sweet recorded Isolation Boulevard, an album featuring the band’s classic hit singles, and a play on their Desolation Boulevard album, as is the albums cover.

“Recording an album separately in different locations throws up a myriad of technical problems,” Scott noted. “It’s impossible for everyone to play at the same time, so all parts are performed the old way and then data transferred back to base camp where the magical digital stuff takes over.

“Sweet would usually record all together in the studio with a performance rather than individually,” he recalled. “But the pandemic dictated the ways and means. The result is a mind-blowing set of tracks, all the hits and a barrage of heavy-duty glam rock.”

Tracks featured on Isolation Boulevard are ‘Fox on the Run’, ‘Still Got the Rock’, ‘Action’, ‘Love Is Like Oxygen’, ‘Hell Raiser’, ‘The Six Teens’, ‘Blockbuster’, ‘Set Me Free’, ‘Teenage Rampage’, ‘Turn It Down’, ‘New York Groove’ and ‘Ballroom Blitz’.

Released digitally in December, mainland Europe may have pretended it didn’t like the United Kingdom anymore after Brexit, but its reaction to this very British band’s latest release said otherwise. A CD version of Isolation Boulevard, alongside limited-edition vinyl editions are expected in due course.

Originally featured on the 1975 multi-million selling Desolation Boulevard album, it is one of the most covered songs in the band’s repertoire – Having been covered by the likes of Motle Crue’s Vince Neil,  Billy Idol’s guitarist Steve Stevens and Saxon – This will in fact be the first time the band itself has released it as an official single.

Isolation Boulevard is available here, and if everyone follows government guidelines and vaccinations proceed as we are it looks like Sweet’s November and December 2021 UK tour dates will be able to go ahead safely, as planned.