Bob Kulick – Skeletons In The Closet 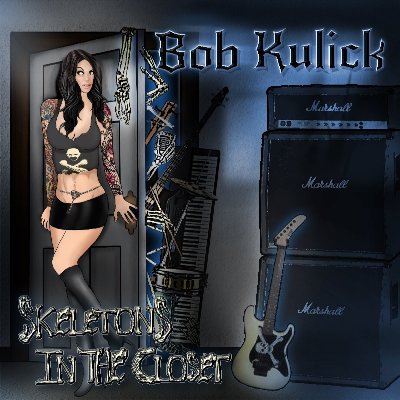 Having spent 50 years in the music business, playing with the likes of Kiss, Meat Loaf, Lou Reed and W.A.S.P; Bob Kulick remains an in demand guitarist, and sometime producer. Little wonder then it took him until 2015 to start putting together his first solo album, Skeletons In The Closet, available through Vanity Music.

‘Rich Man’ starts things off in fine form with guitar histrionics and a melody by way of an old school riff with squeals aplenty and at its best reminds me of a 20 year old Michael Schenker playing along to Kiss or Starz, or in the case of ‘Not Before You’ as Kulick’s guitar wails and moans more like Motley Crue or some lesser Sunset Boulevard act.

Party rock then, with busy hands working a six string hard. The problem is; the songs aren’t that distinctive in their own right.

‘London’ concerns itself with Jack the Ripper and tends to be tediously predictable, but a version of Bond theme ‘Goldfinger’  flows; swinging from the hip as dirty, rough, high end howling, fast stripper rock, title track ‘Skeletons In The Closet’ is also a little seductive in its own way but not a stand out. ‘Can’t Stop The Rock’ is a sleazy variation on Queen’s ‘We Will Rock You’ beat and ‘Eyes Of A Stranger’ gets by via simple chord strokes. More inventively, ‘India’ aims for Rainbow while pulling in Ravi Shankar style raga moves on guitar but doesn’t really gel yet  ‘Guitar Commandoes’ is MTV weekend warrior rock full of clichés that generally work.

You can’t fault Bob Kulick’s guitar playing. It all explains why he has been in demand as a session playing sideman for so many years. The songs themselves don’t always work and sound uneven.  A poor cartoon cover and guests vocalists who tend to be indistinguishable do not help.

As a collection of his work, and tracks he’s record rather than a greatest hits one; they establish a certain US HM style. Whether you take that as a taster for his work for his established body of work or find it dated is your call.