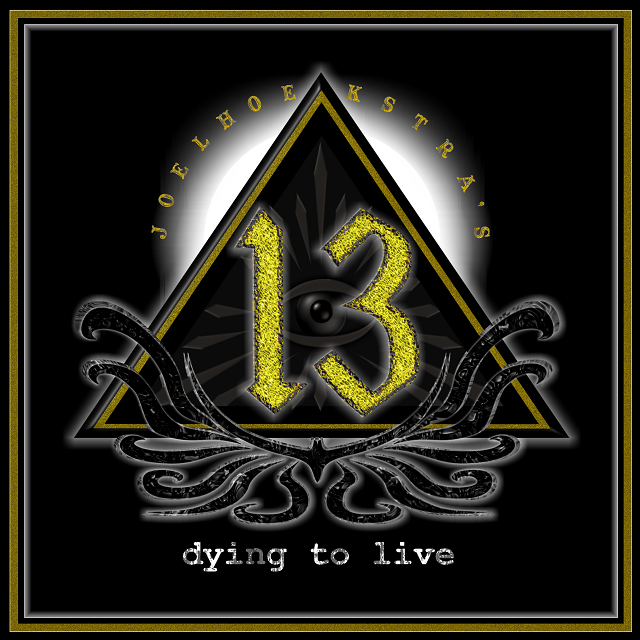 Recent Whitesnake addition Joel Hoekstra has released an album under his new 13 side project, albeit that it was instigated prior to his joining Coverdale’s band and so presumably while he was still a guitarist in Night Ranger. A melodic hard rock album, and released on the Frontiers label, comparisons to the guitarist he replaced in the ‘Snake, Doug Aldrich, who played on Revolution Saints are inevitable. They are however, quite different albums, and interestingly so.

First, Revolution Saints was primarily a showcase for Journey drummer Deen Castronovo (who’s since fallen into disrepute concerning his personal life) as a singer and my feelings are that he didn’t fully convince in the role of frontman, whereas, Hoekstra’s 13 alternates strongly between Jeff Scott Soto (Journey, Yngwie Malmsteen) and Russell Allen (Adrenaline Mob, Symphony X), and both have already proven themselves up to such a task, and do so well here. Secondly, whereas there were indeed some stand-out tracks on the former release, Hoekstra’s 13 flows more appropriately in the context of a full album format. Finally, the most obvious, while the uniqueness of Revolution Saints was in hearing some thundering heavy duty solos blasting through primarily AOR tunes, Hoekstra avoids comparisons: his solos tend towards briefness, indeed the need for upfront guitar playing falls to the wayside in favour of tunes.

The guitarist himself has commented that: “Years ago, I released three solo albums that were mainly instrumental guitar music.  I wanted to put something out that showcased my production, writing and playing in the genre that I’m known for, which is melodic, hard rock’’. That stated you do feel he’s holding back as a guitarist here. Previous to this album I wasn’t that familiar with his playing, and there’s something of Marillion’s Steve Rothery about his actual guitar sound, possibly it’s the melodic edge given as a number of the songs veer towards an if not progressive then rock musical feel – Hoekstra having been a musician for Trans Siberian Orchestra and the show Rock of Ages it’s not too surprising. Comparisons to Dio and Foreigner have been made as part of the publicity campaign, and while true, think of a darker Shadow King, that standalone album band featuring both Lou Gramm and Vivian Campbell.

Certainly opening number ‘Say Goodbye To The Sun’ charges in on a blaze of glory to give way to a meaty stop-start riff wherein Allen rages like the late Ronnie James without anyone feeling dishonoured. Moving into cruise gear for some hardened AOR chugging on ‘Anymore’ there’s a certain familiarity about the piece but Hoekstra rips across the neck of his guitar inserting melodies and a fine squealing solo throughout.

Scott Soto steps up to the microphone for the next number and just melts the room, oozing passion with rarely a line that’s not a hook in a song going by the handle of ‘Until I Met You’. Hoekstra’s strengths as a supporting guitarist enhancing a song and allowing the vocalist to put the message across are readily apparent here, and no doubt one of the reasons Coverdale employed him. That 1987-on Whitesnake keyboard sound can be heard in ‘Long For The Days’ where Hoekstra plays his six string with a fine delicacy then it’s part big poodle hairdo rock-out on ‘Scream’ in between Arabian musical asides that shies from too much over-widdling on guitar and keyboards. That song eases into the hard and heavy rocking of ‘Never Say Never’ another one for Dio lovers while ‘Changes’ offers that Foreigner grown-up lovers’ night time groove with added slide guitar.

‘The Only Way To Go’ is an odd beast. It begins with what probably has its roots in some heavy 70s boogie riff putting on an epic ‘Stargazer’/’Gates Of Babylon’ front but somewhere in its background teases like a disco track. And it works. Hoekstra has said that in terms of concept the album: “Focuses on struggles, potential pitfalls and the art of overcoming obstacles in life to finally arrive where we are meant to be.” From its moaning vocal pouring over an acoustic picked intro ‘Dying To Live’, is another mixed bag of styles wherein a distorted near-prog metal riff jumps in between otherwise lite-doom metal aspects, nicely speeds up at one point.

An introductory guitar line that evokes both the celebration of Christmas and the feel of a sea shanty is fitting for ‘Start Again’ as the album’s journey comes towards its conclusion and redefines itself. The song itself has a classic Styx/early Foreigner feel with Scott Solo in fine form and Tony Franklin (The Firm, Blue Murder) who rarely gets to strut his quite awesome bass playing on this album can happily be heard bouncing and looping in the mix, whereas the drumming throughout is quite obviously the work of Vinnie Appice (Black Sabbath, Rainbow). Derek Sherinian (Dream Theater, Black Country Communion) plays sympathetic, non-overpowering keyboards throughout and there are other guest artists involved too, notably Chloe Lowery (Trans Siberian Orchestra) who duets on the final number ‘What We Believe’ where acoustic guitars conspire and surround the voices with warmth, then as the voices soar around the three minute mark the electrics turn up the volume, then flits between both as if Page was going down Blackmore’s medieval folk route. Those last two numbers being well matched.