Sari Schorr & The Engine Room – A Force Of Nature 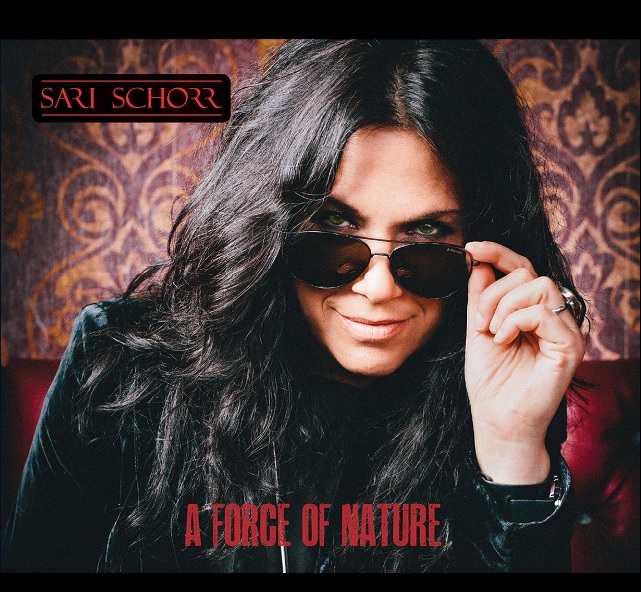 The lady sings the blues, and then she rocks. The too obvious comparison is Janis Joplin (sometimes I wonder how many people have actually ever heard the 60s icon). Whereas if we’re talking tonal range and a female vocalist of past pedigree we might opt more towards Grace Slick wail and Maggie Bell’s roar, she’s also in a similar range to British contemporary Lynne Jackaman. Look, there’s range, power and passion in the voice, so A Force Of Nature is a pretty apt title. However, it goes beyond sheer rage this album.

The songs themselves may peer into a woman scorned territory and there’s the prerequisite quota of love gone bad songs, but there are other social nuances pulled out the bag too over a series of lyrics that pair clichés and descriptive narratives that call out to the listener. What we have here is a woman not a girl. Someone who’s not necessarily been there, seen it all and bought the t-shirt but someone who’s got a point of view and is fully prepared to express it if she feels the need. To counter that, let it also be said Sari Schorr sounds as if she like to have fun, but she knows life ain’t all plain sailing.

Some may consider her voice a little too smooth at times, but it’s always in the pocket, you can’t fault its pitch, and it now doubt has a rawer edge live. Veteran record producer Mike Vernon has surrounded her with a Spanish band, and it’s the sensual combination of Nani Conde (bass), Jose Mena (drums) and Quique Bonal (guitar) as The Engine Room, with Julian Maeso (keyboards) on certain tracks that purposely fills the grooves of this record to let Schorr sing to her heart’s content. To this there is a selection of guest lead guitarists, to which primarily I draw your attention to Innus Sibun. He’s apparently previously played with Robert Plant so there may be some records from this millennium by the old Lemon Squeezer I need to check out.

Sibun layers in a sensual squealing opening to ‘Ain’t Got No Money’ the tune itself settling into a smooth grounded swinging blues, allowing Schorr to sing sweetly and cool, the dig in expressively. It’s followed by the back porch blues of ‘Aunt Hazel’ where her sassy vocals drive a tasty guitar into a frothy race near the end. That the song’s title is urban slang for heroin may account for its musical comparability.

‘Damn The Reason’ hooks you with its sexual tension, the dichotomy to this being it’s a song about domestic violence. Musically the heat continues with the rock steady groove of ‘Cat And Mouse’ and again here as we listen the subtle storyline reveals itself to be one concerning emotional abuse. If your head is bopping your mind is rocking by now, or will be once you hear her rendition of that old classic ‘Black Betty’. Yeah, we all know it’s a Lead Belly number though we’ve only heard Ram Jam’s 70s classic rock hit version. Here she takes it back to a working chain gang feel, one step removed from gospel while veering into a slow metal blues; the song itself now a foreboding gothic premonition even as it intimates the birth of that child gone wild was through rape. Nope, you’ll not listen to that Ram Jam version the same way again.

Walter Trout takes lead guitar and writer credits on the strident ‘Work No More’ with its licking riff, and Maeso’s organ swirls knowingly over ‘Demolition Man’, then things get sultry and begin to groove as Oli Brown guests on guitar for ‘Oklahoma’ while ‘Letting Go’ opts for a waltzy blue swagger.

Schorr’s throaty come-on to ‘Kiss Me’ makes it the grown-up sister to Jennifer Paige hit single ‘Crush’. It’s a cruising mainstream rocker with affecting harmony vocals. A powerful cover of the old Motown song ‘Stop! In The Name Of Love’ arranged as a hard, slow torch blues number, again with vocal harmony asides, is a perfect follow-on, before a piano leads us into final number ‘Ordinary Love’ that has a cool mainstream jazz feel. A song about ageing but the song itself is a timeless work of beauty as it cleverly winds towards conclusion.

An album about grown-ups and how they may be a little wiser but can still be prone to making the same mistakes. A Force Of Nature acts as an impressive introduction to Sari Schorr & The Engine Room.