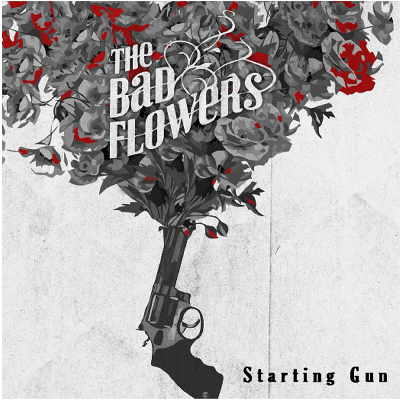 Having made a name for themselves throughout the Midlands, last year The Bad Flowers began their assault on the UK at large. Tom Leighton (guitar & vocals), Dale Tonks (bass & backing vocals) and Karl Selickis (drums) found themselves on support slots and scoring a couple of rock radio hits. Now, in 2018, they’ve released their debut album and it opens in style.

‘Thunder Child’ is a raucous garage approach to a Zeppelin style riff as if played by the Bash Street Kids while wagging off school. The sound literally roaring out, it’s like the strings are being ripped off the guitars they’re played so hard. The lyrics are at once clichéd yet fresh and let’s admit it there’s something of Spinal Tap’s ‘Tonight I’m Gonna Rock You Tonight’ in the melody, but its heart is in the right place. When Leighton takes his solo the rhythm section more than admirably take the strain, but this is a three man army throughout.

The band has a habit of stomping collectively on a ferocious pedestrian beat that you think’s gonna have them end up smashed into a brick wall only for them to leap out in sundry unexpected ways. This might be a bit much for some over the course of a whole album but if you’re into vintage Budgie or more recently found Supergrass tremendous fun, The Bad Flowers are this generation’s slightly madcap power trio version.

“What are you afraid of?” they rage on ‘Lions Blood’ and it sounds personal, being full of vitriol as it thuds away with some distorted psychedelics thrown in for good measure. ‘Secrets’ starts more laidback before a part psych-grunge atmosphere prevails with wild drumming from Selickis all over the shop. It’s free-flowing and almost falls apart echoing the way the early Jeff Beck Group used to jam. ‘Rich Man’ counters that musically being a tight leaden working blues number before speeding up.

However, for a real change of pace we have ‘I Hope’. This sparsely strummed acoustic number features a much tenderer voiced Leighton. Ostensibly about  a lover now lost but wishing them well, it’s also often the last number they play during a set as a reminder to fans to get home safe. There’s a touch of the lonesome cowboy riding off into the distance and some heart felt words that strike home in their simplicity. About as close I’ve heard John Martyn’s ‘May You Never’ in its earnestness.

In contrast, ‘Let’s Misbehave’ is a song about alienation and fear in the modern world and how you cope with your own private corner of it.  It builds, stomping forward with a slight jazz variance to give it groove and a wah-wah wrenched guitar solo to add emphasise but in truth it’s the space left between the three musicians that’s as important as what they do play. .There’s more bludgeoning guitar-filled rock found on ‘Who Needs A Soul’ with a great counter melody bass line from Tonks and some of the best made-a-deal-with-the-devil lyrics in an awful long time. The call and response slamming of ‘Be Your Man’ has a certain ironic feyness about it despite its machismo come-on.

One could look at second single ‘Hurricane’ as showing us where the relationship behind ‘Thunder Child’ has moved onto but musically it’s different, despite another great hook-line chorus to sing along to. Tonks turns his bass up as to give us ‘I Don’t Believe It’ before tempos change with hard short and fast spurts of energy, and replacing the Beck-like jam of ‘Secrets’ for a Cream one here. That leaves just about enough room for ‘City Lights’, it’s loud and proud blues rock metal with a crushing solo performed as a paean to walking the city a night; as much about freedom, as street crawlers and the homeless.

With layered tempos and hell for leather and slow marching stomps aplenty, Starting Gun might not quite be what radio listeners were expecting of The Bad Flowers, but for those who get where they’re coming from then the title says it all, this is only the beginning…