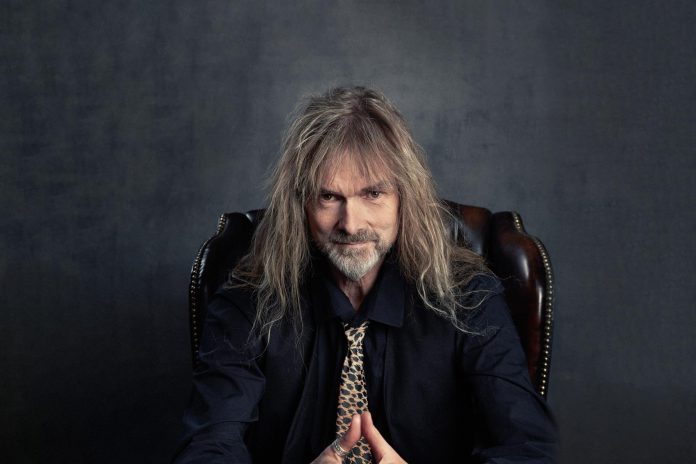 Revel In Time is the third Star One album and a contrast to previous Lucassen work’s, such as the Ayreon album Transitus, which was a more cinematic piece of work, almost a musical. On this album, however, every track has been inspired by films with time manipulation as a theme. In fact, the album title is a word-play on ‘Travel in Time,’ from Blade Runner.

Revel In Time is very much guitar-oriented, there’s more focus on virtuoso musicianship and, in comparison to Transitus, it’s an altogether much heavier, riff-based album, featuring a bewildering number of musicians and singers, which was mainly due to the issues involved in getting musicians across to Lucassen’s base in Holland to do the recording. What’s different about this double album is, not only is every song on disc one sung by a different singer, the same songs are on disc two but, again, each is sung by a different singer from the previous versions. As Lucassen says, the songs had been recorded but were considered to be too good to be seen as just ‘guide’ vocals, so they’ve been compiled together as a separate disc.

This new album combines the usual high standard of guitar playing behind some top class, heavyweight vocalists, notably Damian Wilson (Bridge Of Life) and Floor Jansen (Hand On The Clock), whose voices deserve an honourable mention amongst several other good vocalists, plus Haken’s Ross Jennings (Prescient) gets in on the act as well. Lucassen’s work tends to flirt close to the edges of melodic heavy rock, with ‘28 Days Till The End Of Time‘ and ‘Prescient’ being examples, a mix of styles, being heavy and riffy but not full-on overkill, and Prescient with some vocal harmonies worthy of Gentle Giant. The influence of other bands is also noticeable, with ‘Fate Of Man‘ being pure Nightwish circa Tarja’s time in the band, and ‘Today Is Yesterday‘ is mid-1980’s Metallica.

As with most of Arjen Lucassen’s project’s, Revel In Time is more of the same as his previous albums, which is not to say it’s unworthy; there’s plenty to enjoy here on what is an album of quality musicianship, it just means the previous formula is being closely adhered to, which means guitar shredding to the max and solos attempting to play as many notes as possible in the shortest possible time, with ‘Year Of ’41’ and ‘Today Is Yesterday’ being prime examples. This album is rock all the way, very much riff-centred, and no instruments like dulcimer and woodwind which were used on Ayreon.

Arjen Lucassen’s become a household name with his forays into symphonic melodic prog-metal, and his stage extravaganzas like Ayreon and, I’d venture to suggest, alongside Devin Townsend, Lucassen is ‘musical marmite,’ meaning you either buy into what these artists are doing, think it’s brilliant and lap it up, or you dismiss it as overhyped pretentious drivel. But, whichever you choose, there’s little doubt Arjen Lucassen’s scope and vision down the years deserves full recognition.