On Wednesday the 24th of July, 2019 the furiously heavy Bloodywood took to the stage at The Lanes in Bristol. This was the bands first ever UK performance and rightly so, the gig was a sell out! The Lanes is a truly unique venue which is situated in a retro styled bowling alley, which upon arrival didn’t seem the place where a metal show would go down but I was proved otherwise the second the show started. 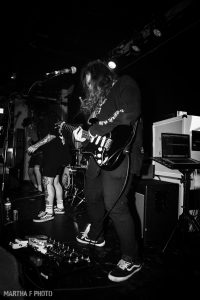 Liquid State came to the stage with a strong start. The band consist of four members, local to Bristol who brought a powerful, huge sound to their entrance. The band had such an intense sound they emptied the smoking area making the venue nice and busy. The crowd were loving what the band were about, the front vocals were strong and aggressively heavy which suited the raw bass tone. Bassist (Ben) attacked the bass with such ease. Main vocalist (Keren) sung with a certain level of edge, bringing moody vibes and mixing them effortlessly with her hardcore attitude. Kerens vocals took centre stage when combined with the backing vocals provided by Ben and Kray (guitarist). The band showed a high level or professionalism during their set by showing strong musical talent and good engagement with the crowd. They owned the stage like it was their own. I was very impressed by the bands guitarist for his professionalism for how he held his own when his guitar strap broke half way through the set and he recovered with such ease, he recovered like a pro. With the mixture of strong vocals and a high level of instrument playing I seriously see this band going far after their brilliant opening performance. 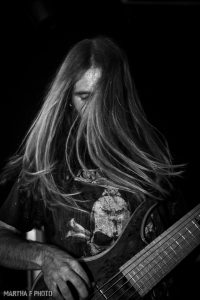 Endeavour swiftly followed, continuing the heaviness forward into the night with their intense prog based music. The band had a crushing start to their set which stayed strong throughout. The front man was not only an immensely talented vocalist, he also showed that he has a funny side that he wasn’t shying away from displaying during their set. It was at about two songs into their set that he joked about being a prog band, saying that “as we’re a prog band we already only have two songs left”. This left the crowd in stitches as the first two songs had taken up about half of their allocated 30 minutes slot. My favourite line plucked from their set was when frontman Chris described the band as “your friendly neighbourhood prog metal band” this appealed to the Marvel fan within me very much. Throughout their set the band showed brilliant crowd engagement, this was backed up by an outstanding performance. The band showed a strong lead guitar technique, effortlessly shown by guitarist Iain. The guitar tone complimented amazingly with the brutal six string sound radiating from the bass. Bassist Ben showed his talent well when his fingers walked up and down the neck of the guitar with such ease, playing this well seemed almost effortless to him. Endeavour seem like one of those bands that could easily take on a metal festival like Tech Fest and do so well. The bands technical, prog based sound would work brilliantly supporting the likes of Monuments or Periphery. 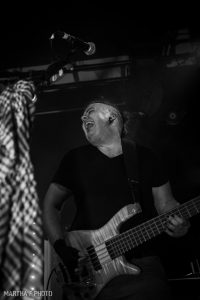 Armada of Secrets are an alternative band with an interesting mixture of dance vibes throughout their songs. Before the band took to the stage, both myself and the crowd could tell they had a high level of professionalism as their stage production was done to a high standard. The band had scattered their logo over their equipment and were proud to show off their name. They showed a very strong, big sound for only having three members, with the bass guitar standing out above the rest. Singer Caroline proudly showed off her fantastic range of clean vocals with unapologetic confidence. The bands drummer had brilliantly upbeat drumming pattern to go well with the dance like quality to the band. It was awesome to see how the band interacted with one another, the playfulness between the lead singer and the bassist was endearing. The band showed a outstanding performance from beginning to end, over coming technical difficulties (with the bass) and dealing well with them. Armada of Secrets told the crowd that they met Bloodywood back in the day and were humbled to be supporting them on their UK tour after not playing shows for about 5/6 years, the band came back with a banger of a show. 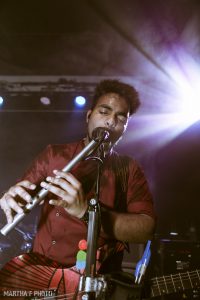 The crowd were nicely warmed up and ready for Bloodywood to take to the stage. The band announced that this was their first ever time in the UK and their first ever tour! This was fantastic to see how an internet phenomenon take the world on with their important message behind them. I felt very honoured to be apart of this brilliant show and I was seriously looking forward to shooting them live. The venue was packed, every single person who bought a ticket was in the room and the floor above, jumping around, moshing and singing their hearts out. The vocalist went into the crowd and was welcomed by a surge of singing, sweaty fans around him. The band said “we thought we’d be playing to about ten people each night” so I couldn’t imagine the emotions going through them during this gig. The band mix traditional Indian folk instruments with what can only be described as thunderous choruses to create a fantastically unique and honest sound. Bloodywood took the time to talk about important issues surrounding mental health which they’ve incorporated into some of their most popular songs, something the crowd were definitely loving to be a part of, myself included. The fact that this is the bands first ever tour and first ever time playing our country and they absolutely nailed it seriously excites me to see where this band will project themselves in the near future.