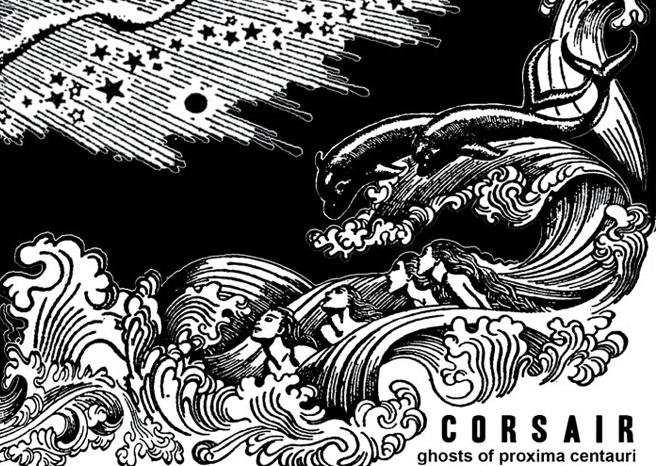 Somewhere out in space a dwarf star implodes, crumbling witlessly into oblivion while a million light years away a wolf howls at an unearthly moon: From this scuzzed-out barrage of sound two guitars surface, emitting acid-tinged phrases that call out to each other, begin to dance side by side then argue; shrieking in emotive stoner-blues rock fury. ‘Wolfrider’ is the name of this instrumental. I’m not sure what a wolfrider is, and it’s probably best not to ask.

What’s apparent is we’re heading out into fantasy territory as vocals take up the call over guitars doing a hard rock jig in ‘Warrior Woman’, then with ‘Burnish the Blades’ the six strings turn fuzzily corrosive as they head out into a longer extended psychedelic metal-jam.

By now we’re about half way through Ghosts of Proxima Centauri a re-release of the second EP produced by American progressive rock/metal four piece Corsair. A band that features Jordan Brunk on bass and vocals, Aaron Lipscombe on drums, plus Marie Landragin and Paul Sebring, guitar and vocals both.

Reference to the likes Thin Lizzy and Hawkwind have been made by others regarding Corsair’s sound and there’s a definite early ‘70s feel present but with a number of instrumentals and the way the voices work collectively I’m thinking more so the sound of Wishbone Ash; most notably on the stirring ‘Centurion’ where the twin lead guitars rip out torrid licks before dipping into melodic melancholy. You push that guitar sound towards a more acid-rush status and we’re heading towards the Welsh borders and Man, who are still going strong to this day: I doubt either band’s been a direct influence on Corsair, but there’s little doubt they’ve all drank from the same spiked well.

With ‘Orca’ the rhythm section is suitably higher in the mix as assorted time changes take place, the guitars really bellowing and moaning by the time this mini-epic reaches its climax. Concluding with ‘Eyes of the Gods’ things speed up with a spaced-out nod and a wink to the EP’s opening notes before getting more urgent and angry vocal wise, while the guitars weave in a classic manner, alongside a guest violinist.

Ghosts of Proxima Centauri is a recording of a band still developing. There are tracks that are derivative and rough around the edges, but the experimentally progressive rock direction they were heading at that time is worth more than a cursory listen.

Ghosts of Proxima Centauri is out April 30th via Shadow Kingdom Records.