DARKLORE illuminate The Evil Of Man 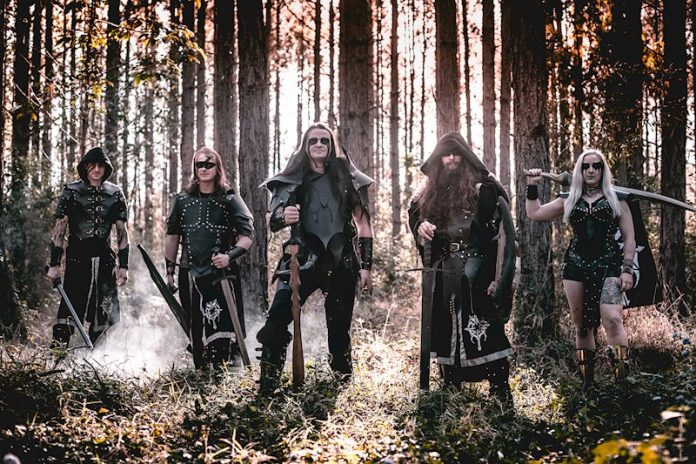 When an Australian band calls themselves Darklore and releases an album whose cover art features immolating demons and acolytes, you kind of assume it will be blood, guts, and death-thrash…well, yes and no. Sure death and thrash metal are rife but so is symphonic and the fantastical series entwined suggesting they are birthing a new genre of their own… deathly, proggy, symphonic thrash metal, anyone?

It all starts with the (purposely) misleading quiet of ‘Retribution’ with the glorious keys in no way preparing you for the onslaught of ‘The White Hand’ which hits like a truck but maintains a unique melodic approach behind the heavy riffing and growling vocals. Then, after the monks join in on the carefully crafted bridge, I was wishing for a suitably blistering solo that wasn’t there. The epic that is ‘Castle Black’ is an example of the best of this genre and fully warrants my earlier labeling. Whereas the majestic, proper riffing of ‘Wings Of Fire’ is needlessly backed by the frantic double-kick drumming that jarred for me with the structure of the rest of the song…still the best one here IMHO.

The final track, in all of its 15 minute glory, sums these talented guys up the best… ‘Curse Of Frostmourne’ has every element you could ever want in this crowded genre and Darklore prove here that they are up there with the best of them. Take the extended quiet section of intelligent keys and percussion that brings a touch of symphonic drama to the proceeding in a brilliant way before the unworldly scream takes us into power chords by the bucketload.

So if you like your rock peppered with growls, riffs, kick drums, and power, then look no further: this band adds an extra dimension that makes it genuinely more accessible and enjoyable than most of their contemporaries.