Diamond Dogs invite you to a Slap Bang Blue Rendezvous 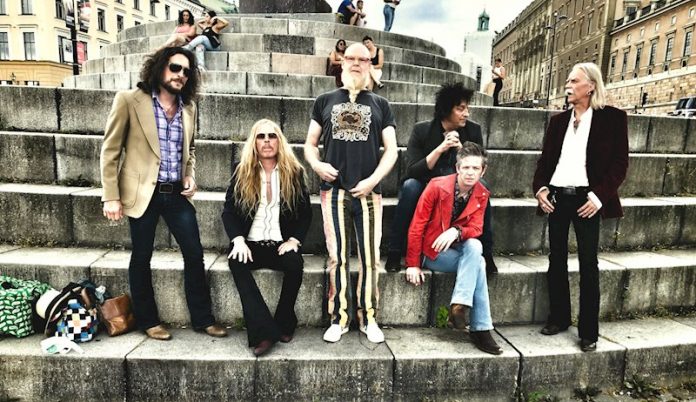 Sweden’s rock legends, Diamond Dogs, have always worn their heart on their sleeve and revel in the rock and glam rock of the 70s and, after over thirty years on the road, they’ve lost none of the sheen seen on the latest double album release, Slap Bang Blue Rendezvous. Twenty-four tracks to keep you amused with glorious, sleazy R’n’B (when that meant something) infused rock and roll all of them jammed in the studio during pauses in the lockdowns.

Take ‘Alright Brutus I’m On’ that opens the hour and a half extravaganza with a Faces like treat, followed by the Foghat – ish swagger of ‘What If I Knocked’ but with the smooth edges roughened a bit. With twenty-four tracks to choose from, I will have to go for the Hoople influenced, brilliantly-titled ‘Rocked, Wrecked, Robbed And Ruined’ complete with great backing vocals and sing-a-long chorus or the acoustic and clever ‘Ghost Pain of Your Love’ – a ballad of loss. Or try the Son of My Father (without stylophone) crossed with many a Chin-Chap song that is ‘Rock It and Roll It’. Then there is the Kinky ‘Sunday Haze’ or ‘Anyway I Can Make Her Happy’ for another chart busting ballad.

Put it this way, whichever you choose you will be transported back to those heady days but with bang up to date, originals that pay due deference.

Slap Bang Blue Rendezvous is out on January 21st.