Envy Of None may become beloved by many 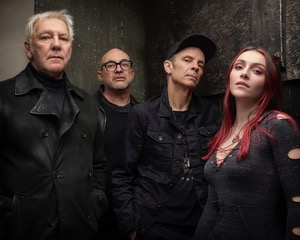 With the sad demise of the mighty Rush following Neal Peart’s passing in 2020, it was presumed the two surviving band members, Geddy Lee and Alex Lifeson would be walking away from any more involvement in making music again. This was the route Geddy Lee took but iconic guitar hero Alex Lifeson has surprised many, not only by becoming musically involved again but also with the project he’s chosen to become involved with. The project, Envy Of None, with long-time friend Andy Curran, (ex Coney Hatch), plus Alf Annibalini and vocalist Maiah Wynne, is as far from Rush as you could imagine so if it’s reprises of Xanadu or Hemispheres you’re looking for, you’re listening to the wrong album.

Lifeson is, of course, no stranger to going out on a limb and wanting to do something off the beaten track, with several of Rush’s later albums containing pieces that departed from the usual expectations of a Rush track. However, Envy Of None is different from Rush and it’s to Lifeson’s credit he’s chosen to move away from what Rush were best known for. It would’ve been child’s play for him to come up with a few power riffs and give his long-time fans what they’d want, but this isn’t the direction taken here. What’s on offer here varies between synth rock and Alt. rock, with dark melodies and a couple of surprising twists, and the occasional foray into contemporary rock. Only on one track, ‘Spy House’, do we get to hear Lifeson let rip on guitar, and even here the playing is largely contained.

The tracks on Envy Of None are most slow to medium paced, making maximum use of the synthesiser, and the moods also vary between shades of melancholy and hope. The highlight of the entire album is the vocals of Maiah Wynne, whose breathy and ethereal sounding voice is a stand-out feature, particularly on tracks such as ‘Never Said I Love You’, ‘Old String’ and ‘Spy House’, and her sense of melody is evident on ‘Look Inside’ and ‘Liar’. For someone of Lifeson’s standing to come out with a comment like “I’ve never had this kind of inspiration working with another musician before; when we say she’s special, she’s fucking special” is praise indeed.

‘Kabul Blues’ and ‘Spy House’ had previously been put up as instrumental pieces on Lifeson’s website but here they’ve had lyrics added. ‘Shadow’ comes across like electronic reggae and ‘Dumb’ is warmly atmospheric, with ‘Enemy’ being a very powerful track. The album concludes gently with Lifeson paying homage to the professor, Neal Peart, with the acoustic ‘Western Sunset’, a song written after visiting Peart whilst he was ill. “I was standing on his balcony and I saw the sunset. The inspiration came from this.” A fitting way to end the album and a lovely tribute to a fallen comrade.