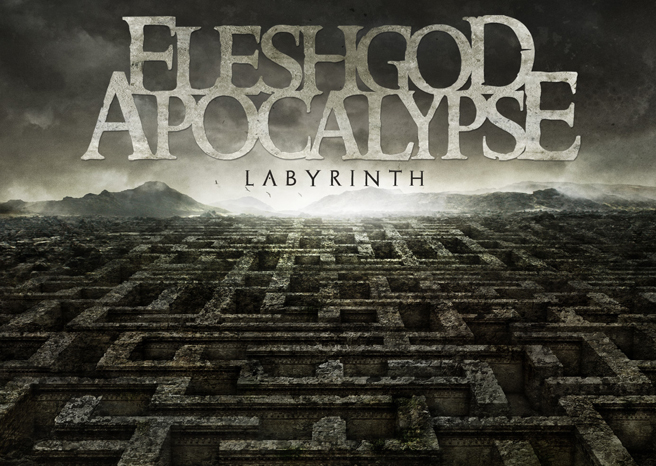 For some time Fleshgod Apocalypse having been making ripples in the world of extreme metal. Causing a splash underground with their debut Ocracles, before expanding their sound with each release, first the Mafia EP then with 2011’s statement of intent Agony through Nuclear Blast record label. This Italian 5 piece has toured with the likes Behemoth, Hate Eternal, Dying Fetus & Suffocation. They are fast becoming one of the leading lights of extreme metal, with their delicate balance of brutality & majestic scope. They have now returned with their new masterpiece Labyrinth.

First track ‘Kingdom’ starts with the trudging footsteps of man whose journey has taken him to the greats doors of the Labyrinth. Creaking doors open & this is where our journey begins. A sweeping subtle piano line accompanied by Operatic wailings gives way to the familiar crashing tones of a forthcoming musical onslaught. When it does arrive it is the soundtrack to the apocalypse. Frantic guitars complimenting the furious barrage of the rhythm section, tied together by the classical elements of their music, which sets them apart from the rest of the extreme metal world. It’s clearly evident when the chorus arrives they have truly grasped and perfected the delicate balance of extreme metal & operatic classical music. Don’t fear though the bile filled hate of death metal vocals is there, which is what makes this all the more of a thrilling listening experience. Fleshgod Apocalypse is at the peak of their powers, brutal blast beats, swirling riffs, finely tuned solos. It’s an exhausting experience & it’s only the first song!

Then we are greeted by the piano intro riff to ‘Minotaur(Wrath of Posedion)’. A solid beat kicks in & already I’m head banging along without a single guitar in view. Here it comes though; a monolithically heavy riff ensures that your attention is well & truly on Fleshgod. The tension is rammed through the roof with the macabre layering of a string section for a brief moment before whipping us up in the vortex of sound they have created. Bring us to the end of this passage with yet another neck severing riff & a marching band sent from hell to take us into the next passage awaiting us.

‘Elegy’ won’t let you get settled like before, the tunnel we are being led down is designed for one purpose only, to destroy everything. Its a frenzied display of how far this band has come along since they burst onto our glorious world of metal. The start stop riffing with the symphonic elements filling every conceivable space, this is putting 99% of everything in the music world to shame. The crazed vocal passages gives a demented edge most bands can only dream of, we have obviously entered the kill room of the Labyrinth. Another sweeping solo of technical wizardry & pummeling chorus throw us on our backs & gasping for air. ‘Elegy’ is a display of what Fleshgod can achieve at full throttle (my soul is sold to the Fleshgod).

We are then Pointed ‘Towards The Sun’, this is a different part of the dense puzzle we are being lead through. After the familiar wall of noise that has beaten us into submission we are greeted with a drop in the tempo. Pounding rhythmic drums & the piano lead displacing the guitars to the background, its clear that Fleshgod don’t just want to smash us into pieces with every conceivable chance. It then leads us to another chaotic whirlwind of pummeling drums & frantic riffing, tied together by the symphonic undertones they have clearly mastered. An outro of a scaling piano will confirm this is a musical journey, not merely a collection of some amazingly well written songs.

‘Warpledge’ throws us immediately back into the furious pacing which is very much Fleshgod’s trademark. A dense multi-layered wall of modern extreme metal with symphonic harmonies, smashing everything before it into dust. Its reminiscent of the furious onslaught Strapping Young Lad were masters at. There is so much technical confidence on display, yet never allowing it to make the music become bloated or forgettable.

We then meet the ‘Pathfinder’. This has a far more familiar feel to those who do not like their extreme metal with all these added dimensions. They are clearly showing the metal community they have not forgotten their roots, only that they have gone epic. This is typified in the chorus soaring high above the eye of the storm & the closing section of pulsating violins & horns. This song is another display of how far Fleshgod have come along since their last album Agony.

‘The Fall of Asterion’ is another display of furious aggression. It comes smashing into you with its intricate lead work & frantic rhythm section, all the while accompanied by the symphonic layering that make Labyrinth exactly what it says on the tin. While this may not be the most expansive of songs on offer, but it does not need to be. Extreme metal is still the name of the games & this is a violent overture.

Now is the time to relax & take deep breaths, enjoy the acoustic arrangements of ‘Prologue’ as you know it will not last long. Indeed it doesn’t as after the fleeting moment of serenity we are left before ‘Epilogue’. The sheer scope & scale is upped even further with another fantastic use of blast beats before hitting us with a steady groove. A vocal trade off of epic proportions comes together; pitch perfect female operatic vocals give way to the more traditional death metal grunts. The contrast is quite staggering & the music suitably compliments it, twisting from acoustic melodies to a pummeling groove. Ever the song is expanding & growing, before rising with a solo section to bring us to the last piece of the great Labyrinth.

The drum rolls bring us to ‘Under Black Sail’, a sweet melody line comes in before we are brought the discordant joy unique only black metal. It’s another monstrous slice of symphonic metal, intricate guitar leads trickle through the bombardment. A scaling riff drops down with an accompanying piano, all the while another fantastic display of drum fills bring us to a suitably chaotic conclusion. Trumpets are blowing, screams are bellowing, all while we are blasted into oblivion by their musical might.

But now there is only rain we exit the album with the Labyrinth, a wonderfully delicate piano piece, it’s like the scene of an aftermath from a colossal battle, one which there is no survivors. The string & brass sections really elevate everything that is on show, but it is not merely slapped on. There is a real thought & care about how it weaves itself in & out of the more traditional parts metal heads look at for. It fades out when its time to be pummeled to death then comes flurrying back like a shot of adrenaline, but the classical music is ever there amongst the Labyrinth of noise.

It’s a truly amazing album, Fleshgod Apocalypse have perfected their craft. Labyrinth deserves to be the album that makes them leave the murky world of extreme metal behind.

Fleshgod Apocalypse ‘Labyrinth’ is out now through Nuclear Blast.