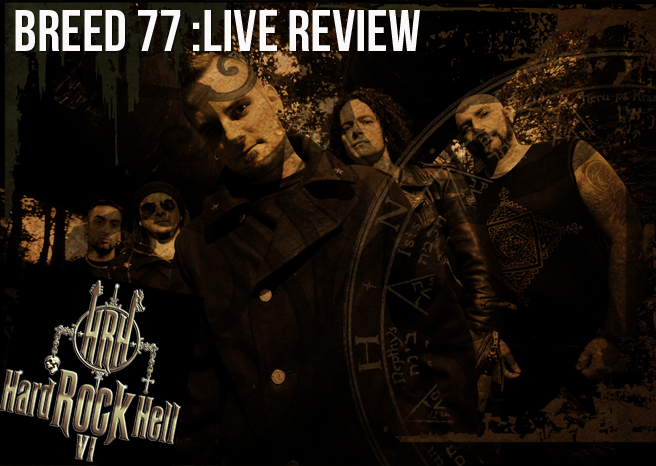 One of the most original bands around today, Breed 77 took the stage at Hard Rock Hell on the Sunday afternoon with a serious point to prove. They experienced a peak in popularity in 2004 with their seminal record “Cultura”, and it looks as if their 2013 release “The Evil Inside” is just as highly anticipated.

Taking the stage with their latin-infused metal, the band tore into a catalogue of their hits, including “Blind”, a surprising and emotional rendition of “The River” and “Insects”, the stomping title track from their most recent album.

However, the highlights of the set were two stunning covers. “Zombie” by The Cranberries, which was heavy, groovy and soulful all in one and “Poison” by Alice Cooper. This was so unexpected, and it showed how much they respected Hard Rock Hell as a festival. Frontman Paul Isola’s bond with the fans is so strong and the look of sheer joy on his face when he was addressing the audience was exuding so much enthusiasm that you couldn’t help but join him in a smile. The band closed with “La Ultima Hora”, their biggest hit which went down so well and got the crowd warmed up for the rest of the day.

Breed 77 are one of the most unique bands in existence. They are criminally underrated and they put on a hell of a live show. Bring on “The Evil Inside” in 2013.