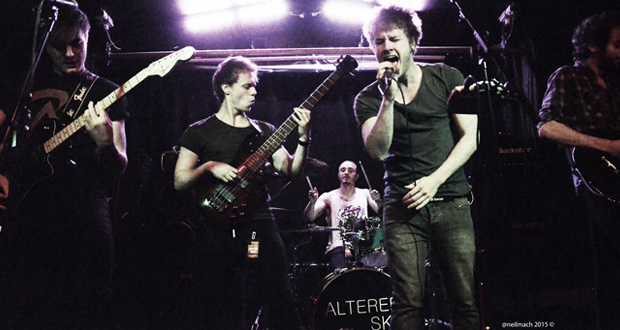 Speaking in Shadows are justifiably acclaimed for their enthusiastic live performances.

So the room shook with a growing sense of excitement & eager anticipation when we went to see this band, last week, playing their Highbury show at the Garage in Islington.

Opening the show with their 2013 single ‘Sweet Gemini’ — this has pirouetting guitars from Ali & Lewis — the band made a vigorous and forceful entrance. Right from the very start, we knew we were in for a treat. The mostly-female crowd was delighted, the London girls greeted the lads from Nuneaton with roars of joy and wide smiles of genuine affection.

Adam’s voice was tan and agile. It tightened and it flexed around the creases in each song, with muscular ease. Melodies were tight, and the rhythm section was wonderfully heavy.

The second single from the ‘The Lies We Lead’ EP came next. ‘Breaking Silence’ has scurrilous guitars. And vocals that were melodious without being too melodramatic. The drums had punchbowl dynamism and the wonderfully dramatic song was filled with sparknotes of electricity. The crowd at the Garage waved and shouted along to the “I’m waiting…” chorus.

As well as the familiar singles, we also had a couple of new songs from the forthcoming EP.

Songs like ‘And Grip’ which had thumping bass-notes from Sam, clapalong riffs, ochre vocals and those dark and throaty bass-notes.

The SIS songs are often very angular, with sharp shadows… And so earnest vocals often seem like they anxiously peek out from the corners.

We also had the new single — ‘Capsized’ — with fraggled drums (from Grant,) frazzled riffs, firefly vocals and simpering harmonies that lifted us above the asphalt breakdowns and high-away from those rapidly oscillating beats.

Always piping hot, the songs came-at-us with acute and speedy energy. Persistent determined and unyielding. And so, it seemed, we arrived at ‘Technicolour Trainwreck’ too quickly.

This was a show filled with confidence and boldness. Needle-and-pop anthems… Always highly pleasing and, of course, thoroughly, contagilicious.