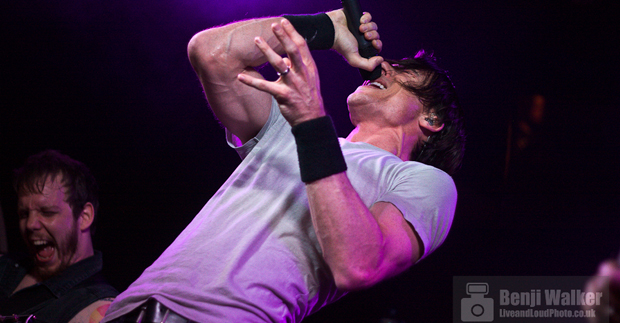 The night isn’t off to a great start – I’m stood outside the venue for half an hour because of miss-information, but to put me in a better mood is the down right sleazy riffs of The Black Bullets – looking like they just fell out of London in the late 70’s. The only thing missing from front man Billy T’s look of sunglasses, patch filled denim jacket and can of lager in hand is a fag casually hanging out of his mouth.

Next up is London based New Zealand punk upstarts Rival State.  I can’t see the correlation between them and the rest of the bill, or indeed the crowd. Other than the kind applause out of sheer politeness (we are British after all). While the crowd might not have got it, I’m certainly looking forward to the next chance I get to see Rival States high intensity, in your  face (quite literally) punk rock.

Awaiting Toseland, I really hope they are terrible. I’ve never thought this of a band before but when you think that James Toseland is a very successful (in the former world champion sense) motorbike rider, married to Katie Melua and is a classically trained pianist. He cannot be some kind of kick ass rock star on top of that – its reminiscent of a quote from Sam Alladyce describing Cristiano Ronaldo that finishes with him having to be hung like a hamster for there to be any justice in the world.

Tonight isn’t the night though, the worst I can say about Toseland is that he his hair resembles Chris Klein in American Pie circa 1999. Other than that James Toseland owns the stage, looking every bit inside his comfort zone. The banter between songs just shows that he is a genuine, down to earth guy, thoroughly enjoying the hand he has been dealt. Whether stood behind a keyboard or being allowed to roam free and interact with the rest of his band James Toseland has easily converted from his previous home of the hard tarmac of the race track to the hard rock of the (well I would call it the toilet circuit but the Bowery District is actually a really nice bar) underground circuit.