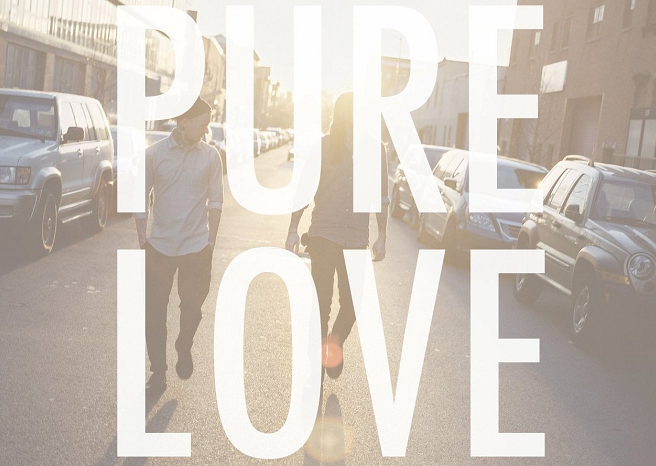 Valentine’s Day. Shoreditch. If you didn’t know better, you might have thought that the XOYO was preparing to host a romantic evening for swooning couples, with the venue suitably decorated with hundreds of red and white helium balloons, their strings dangling from the ceiling. Atmospheric red lighting created a sumptuous feel, and you’d have been all ready for some Barry White tribute act to croon the night away. You’d have been very wrong. The evening was all about Pure Love – but not the kind you’d have been expecting.

Support came from UK acts The Vestals and Turbogeist, the former showcasing a bouncy, summery sound with lashings of synth, a more-than-noticeable nod to 80s goth-pop and even a surprise guest appearance from a tambourine.  Despite problems with sound, the band pulled through with frontman Adam’s unknockable rock star swagger. Turbogeist demonstrated a heavier sound, with elements of punk and metal, bringing out the heaviness in the middle of the set with a frantic, all instruments blazing breakdown and controlled yet still feral vocals. Although both supports were fantastically musically on point, it was clear that the crowd were dying for Pure Love to take to the stage and blow their minds. And blow their minds they did.

Made up of former Gallows frontman Frank Carter and ex-Hope Conspiracy guitarist Jim Carroll, the members of Pure Love have abandoned their previous hardcore backgrounds for something that has much more of a laid back feel – but still with all the heart and passion. Opening to a buzz of excitement, ‘She (Makes The Devil Run Through Me)’ brought a feel of classic rock and roll, bigger, louder and bolshier than the album version – which is pretty damn punchy in the first place. And although ‘Burning Love’ sounds like it could be a lovey-dovey ballad, lyrics such as “face down in these soaking sheets, I just wanna taste your sweat” definitely upped the sexual ante in the room – and anyone looking for a V-Day hookup had the perfect soundtrack.

Frank Carter demonstrated the same cocksure on-stage energy as he had when fronting Gallows, but at the same time seeming much happier and relaxed in his on-stage position, including thanking the staff members and whipping the crowd into a whirlwind of excitement. Barely able to keep on stage, he seemed to spend just as much time in the crowd, making his way all the way to the back at one point – and the audience lapped it up, unable to take their eyes off the enigmatic frontman. The band soon followed suit – upheaving the drum kit into the centre of the crowd, and playing the rest of the gig from the middle of the moshpit. The crowd almost drowned out the band with the “down, down we go” refrain of Anthem, and the jangling melodies of ‘Beach Of Diamonds’ had the crowd bouncing all around the intimate venue. A riotous cover of The Undertones’ ‘Teenage Kicks’ showed that although they veer more to the alt-rock sound, the band are still rooted in the British punk scene.

As Carter jubilantly proclaims in ‘Bury My Bones’ – a hip-swinging, riff-y number – ‘I’m so sick of singing about hate, it’s time that I made a change’. Seeming like a new direction to his previous endeavours, it’s a phrase that definitely rings true. Despite its name giving an impression of anger and bringing a fight, closing number ‘Riot Song’ had an upbeat, bouncy feel, with some summery ‘woah-oh-oh’ action and an infectiously sing-along chorus.

In fitting with the date, this gig really was all about Pure Love – pure love between a band and its fans. Despite only having been around for a year, this is a band that already has a hardcore, devoted fan base – and anyway, who needs a Valentine when you’ve got passion, energy and good time rock and roll?