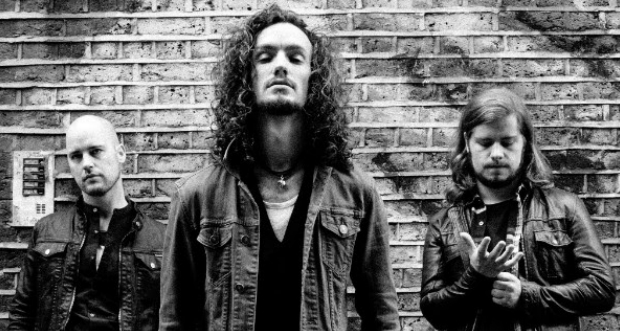 Fair play, anyone who can get a people off their arse to a show on a Monday night must be doing something fucking right. Not a bad turnout in the Welsh capital who still seemed to be drunk-pumped from the rugby result a few days prior.

“So, who’s been to North Korea then?” cautiously chuckles Dead Shed Jokers frontman Hywel Davies. Half tempted to raise a hand in the midst of a tittering half-filled Globe, these boys had some decent moments tonight as they get things going. Giving off a stoned Queens Of The Stone Age meets The Doors vibe that goes over modestly, there’s a lot they can do here as they scratch the surface of something deeper they’ve got going on here. Interesting ideas and musicianship that could’ve done with a bit more life on stage but has our curiosity tickled.

With a new album The Amazing Memoirs of Geoffrey Goddard fresh off the presses, Leicestershire trio Skam on the other hand storm the stage with bollocks full of unsheathed rock ‘n’ roll. There’s no denying their charisma or presence as they stepped things up to a singular point beyond 10. However, their sound did not meet them with the same level of enthusiasm, as frontman/guitarist Steve Hill’s six-string lacked the full chest punch you’d hope for here. Still, after being on the road with headliners for about two weeks, their energy is god damned impressive with the bombastic consistency of a Pro Plus factory filled with TNT and hot dogs. Rounding things off with ‘Massacre’, it’s a strong enough song to stand on its own two feet that forcefully sandwiches in Sabs’ ‘War Pigs’ for no other reason we can see other than to ride that nostalgia wave everyone can’t seem to get enough of. A strong performance nonetheless that brings the Friday night feels to brighten the trudge of a gloomy Monday.

In the grand scheme of things, RavenEye are coming up strongly through the ranks as they build off their 2016 debut LP Nova. They know their crowd and they know what they want; that’s obvious from the get go. Upping the standard once again, it’s not hard to get with the program as they lay down the law with a plethora of beefy, well-structured riffs and power choruses albeit taken from my dad’s vinyl collection.

Judging this Milton Keynes trio on their live merits alone, tonight they brought their A-game. As we’re delivered a hard helping of ultra-polished rock, it’s ‘Supernova’ that really starts to give the band a depth worthy of their reputation. The Soundgarden-esque tone sits so poetically well with frontman/guitarist Oli Brown’s vocals which is met by a thunderous reception from the crowd. Daring stunts on and off the stage are a pretty reliable spectacle that they can’t help but bust out at any opportunity they get; including a full piggyback ride, courtesy of bassist Aaron Speirs with Brown mounted; both still shredding away, all the way around the now rammed venue.

But one big wet toilet paper of a downer and whether it was tongue and cheek or not, came in the form of a plug for their app which just utterly kills things dead. Pure cringe that takes a few more belters to forget. Luckily, we’re treated to a glorious acoustic encore as all three members, including drummer Adam Breeze picking up an acoustic smashing out harmonies that are too infectious to argue. Tonight is proof that rock ‘n’ roll isn’t dead – not by a long shot; but could seriously use with some fresh ideas.