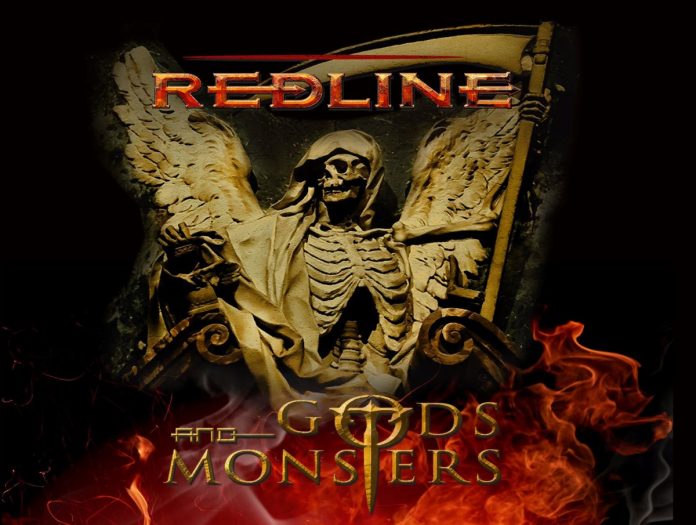 “They’re a bit of alright,” I said on catching Redline during a support slot, before this here pandemic threatened life as we know it. Straight up heavy metal hasn’t been my thing for a while, far too many derivative riffs I conjured up in my own bedroom as a lad, thank you; but there was more than a spark or two of life delivered with some flair in the seasoned rock dogs up on a stage that night.

Chances are I might have seen them with a different line-up a couple of years back, and I’m sure I’ve an early EP by them somewhere. If so, they’ve come on a bundle since then.

A Birmingham based band, they play with the weight and muscle of Sabbath, when the rhythm section wallops home; the songs reflecting the influences of Judas Priest, Iron Maiden, a little Saxon, and some early Dio, but there’s a contemporary aural bite to the sound too. The guitars chug hard but they know how to play a tune, and vocally you’ve got a geezer who delivers at a pitch somewhere between the late Ronnie James and a fat-ended Rob Halford but with its own personal character stamped within it.

A riff tolls out slowly before a deep chord rings out and speedier upbeat riffs ensue, licks chasing and whipping at the heels of impassioned vocals  in ‘Gods And Monsters’, a song you can take to be your standard demons & wizards hard rock hokum, one about how we worship our rock gods unflinchingly, or the more likely prophetical warning that we should be wary of tabloid journalism, media-whore politicians and all points in between.

‘Empires’ takes it up another notch, riding on some vintage lead work a black cat-suited Micky Schenker gave Judas Priest’s guitarists when they were backstage at Birmingham Town Hall on UFO’s Obsession Tour.

‘Prayer For the Dying’ brings things down a pace or two, and it ain’t bad but sometimes I wish someone had prevented Page and Plant from catching that plane to Morocco and bringing back a riff that the world and its wife has since utilised for anything they consider epic. Fortunately, the undulating bass line that opens the sharp chorded sleek night time cruise that is ‘Dark City’ gets your head bopping and your tonsils screaming along again.

‘Killer’ is seasoned with pumping Priest-come-Maiden riffs, high-pitched choruses and lyrics bearing stark warnings about country boys in liquor stores “selling guns and more” and how a “school bell tolls for dying souls”. The broken chorded ‘Fields of Fire’ follows earnestly but perhaps a tad long, before ‘Take It To the Grave’ another riff whose mother was born somewhere between circa 77 and 82 last century bolsters forth with the drive of Purple’s ‘Highway Star’ and with lines like “Stainless steel ride” we’ll presume it a paean to motorbikes instead of big fat cars.

The militaristic Morse code precision of ‘Nowhere Man’ proves another lyrically inspired warning of the times we live in and ‘Hell Mary’ is a supersonic upbeat onslaught with some suitably cliched lines giving more food for thought when put into overall context. ‘Stand And Fight’ is a war cry from the underground for those who survived the fallout after the New Wave of Heavy Metal bit the big one and ‘332’ is an unexpected guitar instrumental more akin to those Surfing With The Alien on which the album concludes nicely.

This is good stuff, old school to some degree musically, with some fine words of wisdom and warning lyrically that are as old as time but still far too relevant. That even when they’re delivering songs castigating the crap going on in this our world there’s often a resilient buoyancy to their sound is another reason to pay attention to Kez Taylor (Vocals), Chris Basener and Ade Yeomans (Guitars), Steve Hill  (Bass) and Mark Biddiscombe  (Drums) who constitute Redline, a band who’ve been around a while, but we should hope to hear lot more of once this whole coronavirus pandemic’s dead and buried.