‘Lying To Me’ is a hard chorded strut with some twinkly lead, a fat organ entering the sound warmly as it will throughout the album. Our first impressions here are that Mr Poole sings close to the mic, half-whispering in confession, later we’ll also hear there’s a more upbeat, poppy edge to him too. But it’s not for his voice that Jeff Beck rates him, so the six-string blues-scaled progression that changes direction as the wah-wah kicks in is a pleasant experience.  That’s taken a couple of steps further when he offers a funky blues rendition of Jeff Healey’s ‘I Think I Love You Too Much’ as the pinched notes of his six string wail away warmly in a tight dance with each other.

The sorrowful acoustic sounds of ‘Longing for a Woman’ follow, and its counterpointed by the break-up side of a relationship by ‘If You Want To play With My Heart’ with some gentle blues-funk of the type Clapton’s early solo albums used to feature. ‘Time Might Never Come’ is a slow mellow tune to break out the cognac to – His right hand plucking the notes with precision before it moves through some moody moments passively before an organ swells and a high pitched torrent of guitar fury ensues. Very nice indeed. Rock

Lightening things up with some fun wordage and a contemporary funk-blues bop is ‘Stay At Mine’ and ‘You’ve Changed’, which is a little bit country, a whole lot R ’n’ B motown, and some rock chipping away at the edges, and there’s another especially tasty solo to be found on ‘Just When You Thought It Was Safe’, until things are taken down for the slow dance smooch of ‘Whoever Invented Love’ and then everything turned to eleven for the swinging shuffle blues of ‘The Question Why’ – although I think we all know the answer to that one.

Poole recites each song like a personal conversation, and as most of his songs seem to be to women, it does leave me feeling like a gooseberry on a number of occasions. However, while you know each song is going to feature a guitar solo to take it to its climax, they’re all worth listening to. Emotion and fireworks; an impressive artillery for the gun-slinging guitarist to be stocked up with, and this album features ten tracks of a similar quality.

Time Has Come is available on the Manhaton Records label, and Ben Poole is on tour in the UK through to May alongside Stevie Nimmo. 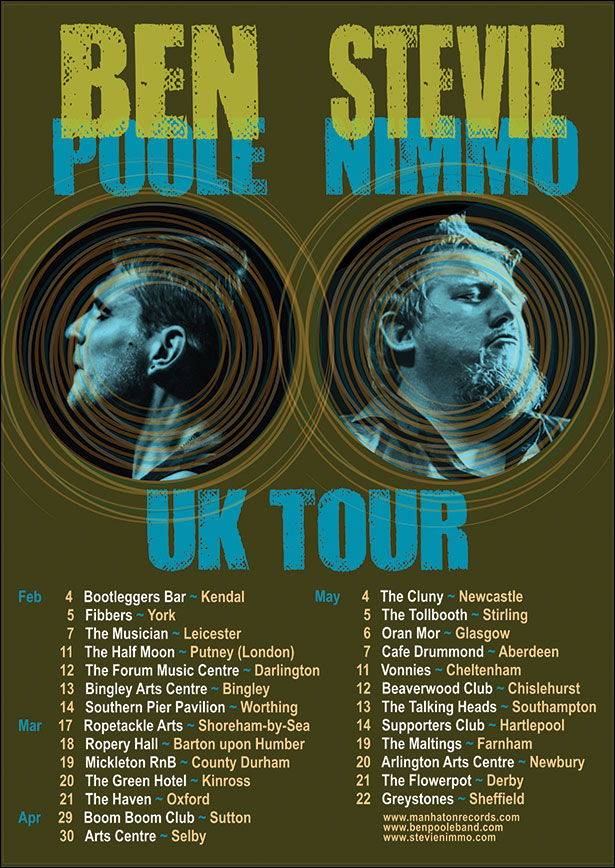