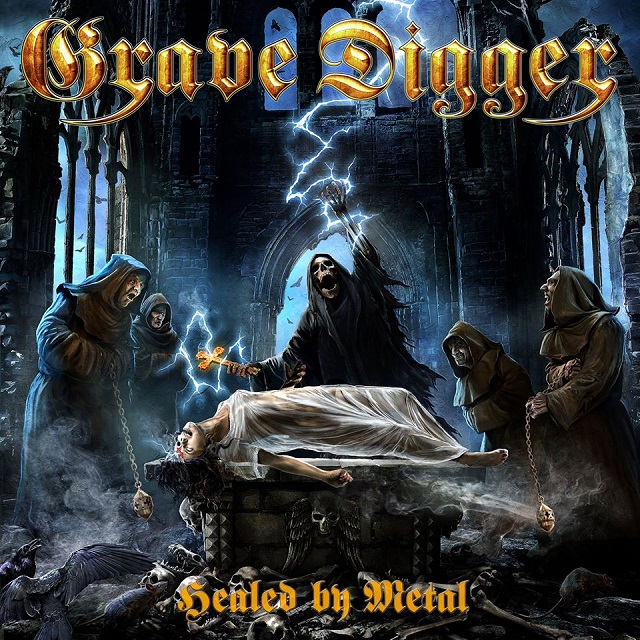 The past few years have seen an increase in returning metal legends from every corner of the genre and all over the globe. One of the most notable is Grave Digger. Along with Scorpions, they represented  Germany when metal ruled the world in the 80s. As metal fans are as loyal as newly-born puppies to their favourite bands – new material is always greatly appreciated by Digger. Since their original reformation in 1991, the Gladbeck boys have rarely disappointed.

From the opener (and title track) this is proof they still have it. Although it is slightly cliche with gang vocals, echo-y production and Saxon-esque lyrics, this track is a future metalhead anthem. ‘Healed By Metal’ is basically a call to arms for anyone whose life has been saved by the metal community. This could easily be an 80s metal album with songs called ‘Kill Ritual’ and ‘Lawbreaker’ – the latter even opens with a riff that could be used in the PC game Doom.

On ‘Free Forever’ influence comes full circle as Chris Boltendahl’s vocal sometimes sound like his countryman Til Lindermann – who has cited Digger as an influence. The chorus ever sounds like it wouldn’t sound out-of-place on a Lordi album. That’s one of the best things about these classic heavy metal bands – it’s like a recipe of influences. Using newer ingredients and old to create a whole new concoction. Echoes of Saxon, Motorhead, Motley Crue, UFO and Maiden are present here.

Although this is a fun record, the metal cliches can get grating towards the end but I doubt Digger fans will care either way. They know what they wanted to do and delivered.