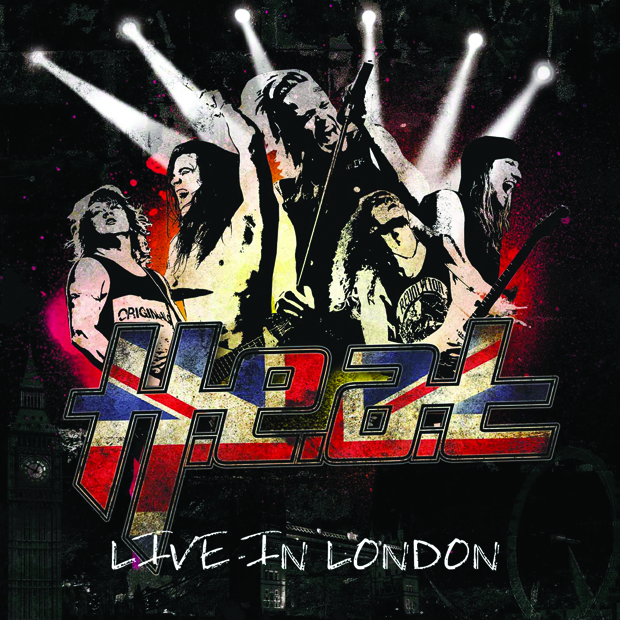 From over the PA comes a movie voice-over quote so old it has barely escaped the silent era, but it’s entirely fitting for these youths:

“The clock is running. Make the most of today. Time waits for no man. Yesterday is history. Tomorrow is a mystery. Today is a gift. That’s why it is called the present.”

Jona Tee’s keyboards flourish flow forth extending the opening to ‘Point of No Return’ then you literally feel Erik Gronwall bounce on stage as he screams out “London!” The crowd roars and H.E.A.T. launch stridently forth on a mission, striking precision like riffs then allowing melodic key changes to flutter under the song’s whirling guitar solo. Live, ‘A Shot at Redemption’ is less country boogie, more upfront rock with a touch of Gotthard sing-along charm – Jimmy Jay’s bass pumps the song into life, and it’s apparent throughout this album that while he may not opt for any tricky triplets his is the instrument that drives the band along in the live arena.

Recorded mainly at The Garage in London on May 16th, 2014, during H.E.A.T.’s first European headline tour, Live in London features an excellent overall production from Tobias Lindell, so much so that you’ll question how much vocal overdubbing has been done, though closer listening veers towards implying Gronwall’s using a stereo microphone.

‘Better Off Alone’ finds a band empowered and in for the chase with an exuberantly sung chorus hook, going into a too brief explicit synth solo, Eric Rivers wrangling out some worthy guitar notes as they return for one final chorus. The band’s earlier Euro hit single ‘1,000 Miles’ throws all the right AOR shapes, but it’s already feeling dated. H.E.A.T. then come on like Def Leppard drawing on Aerosmith with a slight Michael Jackson Thriller feel for the tight shrugging riff of ‘It’s All About Tonight’.

Gronwall swears exuberantly with excitement one minute, espousing impeccable manners the next, his diction particularly clear for the raunchy lyrics of ‘Inferno’ albeit that it’s Crash’s big glam rock drumming that entertains most live on this number. A musical intro befitting some Ingmar Bergman movie blurs to one side as an altogether rockier take on ‘The Wreckoning’ ensues, though you still know the melody owes a debt to Mr. Big before moving into an extended version of ‘Tearing Down The Walls’ where after the crowd participation they move into an understated outro that most unlikely as it sounds is reminiscent of Second’s Out-era Genesis. As on their last studio album, they follow it with the synthesiser melody spun ‘Mannequin Show’, set at a sinister tempo and kept in check by the rhythm section. Backtracking to the past again, ‘Late Night Lady’ offers bubblegum Leppard-derived AOR with a ‘70s guitar wail thrown in unexpectedly.

‘In And Out Of Trouble’ opens with a stadium sized guitar scream subsiding to a taught chugging AOR rocker with harmony vocal and infectious chorus and guitar solo that earns its money working the length of the neck. Keyboards emit ’80-90s blockbuster movie sounds before a bass drum kicks in the beat for ‘Downtown’ as a tale of perseverance leading to hope, the band working the music up and an almost disco feel heard as the guitar cascades out some flickering notes at one point. There’s some gonzoid AOR with a little Gotthard again in the back pocket for ‘Enemy In Me’, a bouncy rocker played just about right in the set for the crowd to appreciate it most. A drum roll starts up ‘One Touch’, and they’re sounding a little tired on this rocker, but Rivers is still giving it some on guitar. They then slam dunk with the “Hey!” shouting AOR rocker of ‘Breaking The Silence’ where guitar and keyboards go all sub-classical prior to a more Lizzy styled duet. Then they end it with a bolshy ‘Living On The Run’ where the keyboards pomp it up, drums bash and crash and bass pummels.

Happy to be in London while waving the flag for their homeland of Sweden, the band exude the kind of positive attitude that will forever be denied those of us born within the same city walls as Black Sabbath, but we can sense it, and some of us can appreciate it.

H.E.A.T. were last year’s guilty secret, this year’s it’s an open admission of a full-on crush!