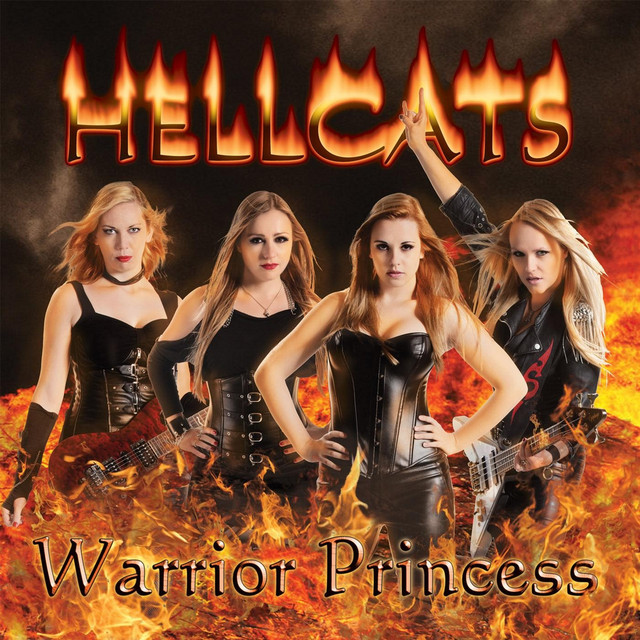 With song titles like ‘Viking’, ‘Proud To Be Loud’, ‘Demon Dreams’ and indeed ‘Heavy Metal’ itself you know this is rawk writ large with every lyric a mantra to some pagan guitar shredding deity or other. Full of clichés, you mean? Well, yeah, but – By the power of Greyskull – they hit the right spot, more often than not.

Being four young Valkyries clad in tight black leather helps draws my attention, singing with an eastern European accent adds an exotic  flavour, and that they pour molten metal first brandished the likes of Saxon, Krokus and Manowar from your speakers ensures we at least be courteous, stop a while and take a listen.

Hailing from Slovenia, and formed by sisters Sasha and Sonja Zagorc (who play guitars and drums/backing vocals respectively), Hellcats have toured numerous Slavic territories since forming in 2006, and more recently been making themselves known in Northern Europe. This being an English-speaking version of their debut album that went under the title of Divja Pot.

Delivering their statement of intent with the name-checking ‘Hellcats’ your granddad will tell you it’s like the b-side of an old 7” single by The Sweet bashing out a variant theme tune for classic dubbed kids drama The Dashing Blades as they scream out “Hellcats, here we come, Hellcats, we’re all for one!” over a tub-thumping rhythm. The lyrics, corny as they sometimes read in the CD booklet, are sung well and with conviction by Ajda Kovacic (their website seems to indicate that a Dasha Makuc may have replaced her) with big girly choruses as Sonja and bass player Katja Mavec join in. More Doro Pesch than Tarja Turunen, the harmonies add a certain modern mainstream crossover pop appeal. ‘Now Is My Time’ is a fine example of this, while a strident riff plays throughout it’s when the chorus harmonies kick in the commercial potential becomes infectiously apparent.

If you want codpiece drama look to ‘Viking’, an acoustic refrain giving way to chords for a potential power ballad about the Son of Thunder approaching on his longboat, only for the tempo to pick up and the girls get really effective with their harmonies coming on like a heavy rock Wilson Phillips. The maidenly acceptance of misogyny present in ‘Master Of The Night’ (whether he be Satan or some cool dude propping the bar) and ‘Steelrider’ are a little disconcerting but they’re basically gothic romance narratives, and to my mind the weaker tracks on the album, though the latter features an exceedingly good guitar solo.

Clichés that so totally work are ‘Proud To Be Loud’ and ‘Heavy Metal’. It’s not just that they deliver completely on what they say on the tin; it’s that they’re great tunes. Sung with utter conviction, played with adrenalin and grit. The first in particular a great headbanging, devil’s horn fist-pumping anthem. ‘Demon’s Dream’ rides on a sexy chord thrust, with a quieter glass splintering riff played alongside, until the precise soloist that Sasha Zagorc is turns it up to 11 as she lets out a shrieking torrent of notes when they segue into ‘Stillness In Time’, a song that somehow combines the qualities of both early Saxon and Heart at their 80’s AOR pomp. The title track itself wanders about with quiet purpose in Iron Maiden territory before charging forth as another big anthem chorus rocker.

Flying Vs, high-heeled boots, and songs that cut to the chase without outstaying their welcome.