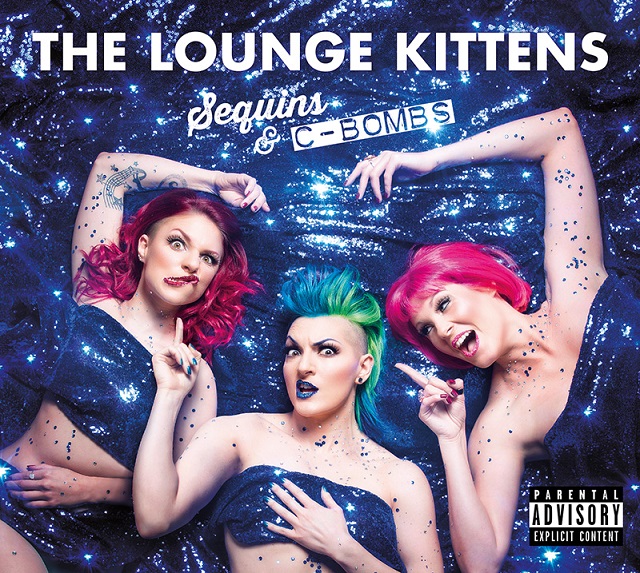 There is something instantly likeable about The Lounge Kittens. It’s the way they have taken a quite different genres (accapella and rock )  and made it “cool”. Its their simplistic approach to the music with the main focus being on their voices and keyboards. The third being: all of songs are covers, ranging from Alice Cooper and Rammstein to the Darkness and Toto. Due to the fun nature of their genre there is no limit when it comes to selecting songs to cover. It just works.

2015 was a big year for the Kittens, when they were taken on tour with Steel Panther, 2016 is set to blow that out the water. They have just finished a festival run (including Stone Free at Londons O2 Arena), they are releasing their first full album this September, going on a full UK headlining tour in support of the album THEN will be sharing the stage with Status Quo this winter. Not bad eh?

Sequins and C-Bombs is a fearless outing from The Lounge Kittens. It takes 2 songs to showcase the flexibility of the group, from a slow, serious cover (Poison) to a darn right silly and fun filled cover of Bounce by System Of A Down. The same can be said for track 4, (Jump Around by House Of Pain) It’s obvious these girls are doing this for the love of music and are just having fun.

That being said, the fun tone of the previous few tracks is somewhat lowered for Love is only a Feeling (The Darkness) and Africa (Toto). This is no bad thing, Love is Only a Feeling, is a beautiful tear jerking ballad, arranged and sung with as much effort as the original. If anyone is doubting the Kittens’ effort to the cause at this point, I urge you to 1) watch the “Making Of…” web series they put together prior to the release of the album and 2) to listen to the cover of Africa by Toto. It’s incredible. Timia, Zan and Jenny excel themselves in almost every way in this track. For me, the highlight of the album.

Enter curveball #1 for track 8 “Kick my Fire Starter Into Space”. While the songs the Kittens produce are of very high quality, when they produce a melody of several songs together, things are taken to another level. A rendition of several Prodigy songs works incredibly well and is a lot heavier than anything we’ve heard before from the Southampton trio. It’s the only song that features more than just keyboard (guitar oh yeah!) and you could even class this song as “Metal”.

Curveball #2 comes later on in track 13, in the form of “Rammers” a Rammstein melody. Yes you read that right. Rammstein. As a writer who loves all things German, when I heard the Kittens singing in German, dreams came true.

The girls take on Want You Bad by The Offspring, but tone and slow it down so much that a punk song becomes a love ballad. Id even go as far as saying, in terms of the lyrical content and message it conveys, it’s an improvement on the original.

The final part of the album, returns to the kittens having outright fun, just as the album started. Upbeat covers of Sad But True (Metallica), Bodies by Drowning Pool and finally closing with The Beautiful People by Marilyn Manson.

Jenny, Timia and Zan are slowly becoming “that group” that people love but aren’t to sure why. In a good way. The keyboards, the harmonies, the fun involved and the overall singing is that of the highest quality. With a song library of more than 40 songs, The Lounge Kittens aren’t going away any time soon.

It’s difficult to put to words what The Lounge Kittens do and even more so on how they do it so well, but one thing is for sure, Sequins and C-Bombs is a fantastic example of when covers of iconic songs are done right. This album is fantastic.

Sequins and C-Bombs is out on 16th September via Pledge Music.