Review: The Young Hearts – Honestly, I Was Just Thinking 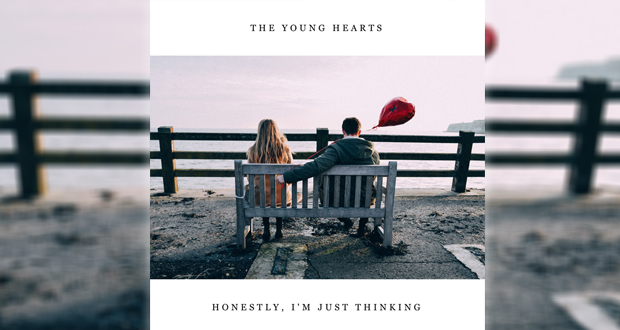 Although the album is only four tracks long you can get a very good idea of what it would be like to see The Young Hearts perform. Each song is rammed full of energy with the light nimble guitar work of Aaron entwined with Craig’s singing creates a highly honed and developed set of songs. They are well written, well crafted and most importantly very well executed.

The Young Hearts bring you a style that’s hard to come by these days, instrumentally uplifting whilst lyrically taking a journey through old relationships, trials and tribulations, which ultimately should take this band far.

Here is the music video for the third song on the album, ‘Smoke‘:

“I’m tired of looking at the same place” – a line from inside the chorus of the album’s opening track, ‘Bloom’ that is a cry out to feeling trapped. It’s a self-reflective track to a previous relationship and that tricky age of seventeen when you start to question your very being and begin to want more out of life. The penultimate track ‘Smoke’ effortlessly flows through into the fourth and final song, ‘October’ which in itself is a perfect song to end an album on as the guitars fade out, leaving the last remnants of a piano’s keys to draw everything to an end. They have already been featured on BBC Introducing early last month and with the slickness of their recent music video for ‘Smoke’, there is a sense of a real drive and effort to get this quintet band leaping forward into our everyday lives. From Primordial Records and Ian Sadler at Emeline Studios behind them, the sky is very attainable.

I really think you will be seeing and hearing more and more from The Young Hearts in the coming years so it would be a good idea to get in on the early stages, especially with their limited run of this album on vinyl.

There are still a few dates available to see them before the year is out during October and November, be sure not to miss them;