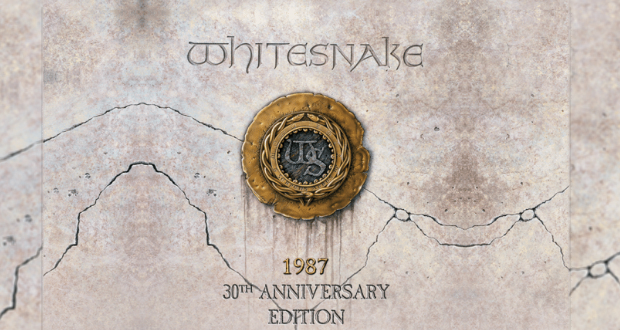 It is 30 years since Whitesnake graced us with the album that became known as 1987 (or, in Japan as Serpens Albus). To celebrate, Mr Coverdale has helped put together a luxury box set of 4CDs and a DVD!

Reasonably priced at £40 it does include a poster, a lyric book and a 60 page hardback book with new pictures from one time bassist Neil Murray; memorabilia and a new interview with DC himself… oh, and 5 discs.

Disc 1 is the remastered album. As so many people have a copy of this I will only comment on the ‘new’ sound… it isn’t as good as the 20th Anniversary version which wasn’t as good as the 1987 version! Modern tweaks an improvement does not make.

Disc 2 is Snakeskin Boots a live recording from the ‘87/’88 tour. The sound is that of a glorified bootleg but is still a worthwhile listen even through the muddy sound. (Bear in mind that the line up is not the same as the album – by this time DC had fallen out with John Sykes. Vandenberg and Campbell were on guitar for the tour).

Disc 4 is more remixed singles and strangely, the same songs from the 1987 Japanese mini album.

Disc 5 (the DVD) revisits the videos which MTV screened non stop; which led to DC’s ill fated marriage to the female star (Tawny Kitaen) and which I still have on the provocatively titled Fourplay VHS (ask your Dad!). You also get a 30 minute documentary on the making of the album filmed for this release.

Disc 3 is ’87 Evolutions. This is the one I wanted. A disc of demos and rehearsals which show how the album grew into the monster it became. It is a fascinating insight & provides exactly what it says – “loose, rough & ready ideas”. Most segue from the very rough outline to a full band rehearsal.

Not essential then although for a completist like me, yet more versions of this album had to be in the collection.