Steel Rhino are on the charge 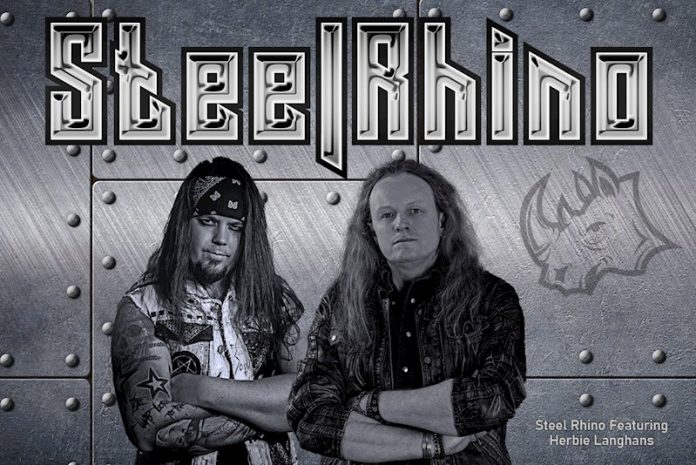 Essentially a solo album by Mikael Rosengren, (a drummer of some skill who occupied the stool with bands such as Dirty Passion, Revolverlution and Bai Bang) Steel Rhino is a heavy rock/metal set and benefits from the vocal interpretations of Herbie Langhans who graced many a song with bands such as Firewind, Avantasia and Voodoo Circle. He recruited Filip Rosengren to add the bass and guitar parts and he does a very good job too. The whole thing gels really well too considering that the vocals had to be recorded in Germany thanks to you know what. By the way, beware of how you search for this excellent band as my research uncovered a dance/electronic band from the early 90s called Steel Porn Rhino – no I didn’t listen!

Opening with the jingoistic ‘Rhino Attack’ begins with pounding drums (natch!) and a heavy riff from both bass and lead introduces the melodic with edgy vocals of Herbie… very high-quality melodic rock that all of those ‘same old, same old’ bands could learn from. The title track is even heavier and has a feel of a late 70s track updated as further strong vocals tell of (I think) the train of the album’s namesake; although this one is attacking too… the poor rhino is being typecast here!

Their first single, ‘Boom Boom’ is nothing like JL Hooker…this is another quality, original melodic rock piece as is the second single, ‘Fire And Ice’ which also continues the apocalyptic theme that runs through quite a few songs. ‘New Tomorrow’ brings a bit more positivity over a great riff and melodic, sing-a-long vocals; the longest track at five minutes, it is also my favourite with the varied structure showing the undoubted capabilities of all three members, the only question is, are they staying together? One can only hope so based on this evidence. Whatever the decision guitarist/bassist Filip definitely should achieve more than his current ‘session musician’ status.

Steel Rhino is released in September