Torn The F*ck Apart ‘The Dissection of Christ’ Album Review 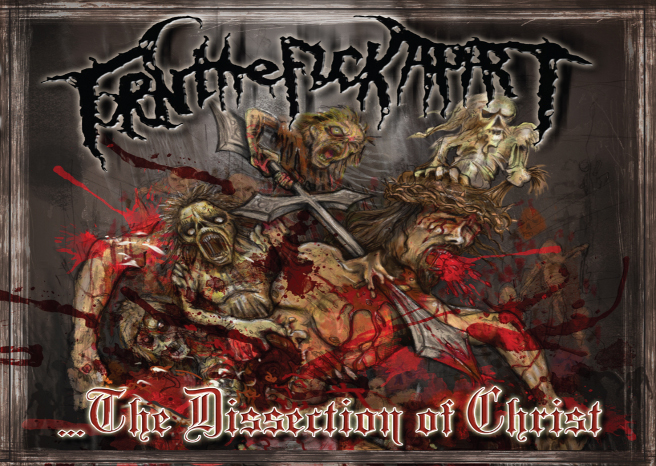 Death metal is not usually this reviewer’s forte, and after choosing to review it on the grounds that the title of the album and the name of the band were cool all preconceptions were dropped. This album is really cool, whether you are a fan of the style or not.

Each track includes a quote about Christianity, religion in general or specifically mentions God, Jesus or some religious act. These have been sourced from all over the place, with younger audiences noting the Pulp Fiction and Sin City quotes that were stolen from the films, as well as older comedic usages of quotation. Every quote relates in some way to the song itself, and in the absence of comprehensible lyrics gives the listener an idea of what the song is about and what the band are trying to express with each one.

Opening an album of this sort with dramatic music from the X-Factor definitely creates a big impression, and along with the quote about religion needing to die so people can live, God’s Blood Turned Black definitely makes you stop for a second and wonder what it is you are actually listening to. After flipping over into standard death metal mode – heavy on the drums and guitar with un-descriptive vocals (which we would say are a shade too low to be used well here) – you get lost in the general maw of noise. I noticed a definite need for a bigger bass presence in this track, but overall the quality depicts the general quality of the album: very talented guitarist, love the energy of the drummer, vocals a bit hit and miss, and bass needs ramping up at some points.

The quote from the beginning of Father of Filth really had me chuckling and highlights serious issues within the Catholic Church – always hilarious. This had more energy and better vocals (including a second vocalist) than the previous track, and with the awesome bridge and the tempo changes keeping things interesting, we were very much more impressed.

Title track of the album, …The Dissection of Christ, used a quote about miracles from Pulp Fiction, which I naturally loved, but the vocals reverted back to being indecipherable. We expected more from the titular track, especially since it is so overtly influenced by Slipknot it is untrue, sounding a lot like their single Duality.

Our Serpent Saviour sounded a lot like a continuation of …The Dissection of Christ and then totally changes halfway through – why not just add the first half onto the end of the previous track and leave the second half as this one?

Finally we were able to hear some bass solo action in Bashed In Prophets and we were very impressed as a result. Not really sure this is the kind of thing I’m in to, but it definitely gets your toes tapping.

Instrumental track Pergatorium is by far my favourite on this album. This is either because I’m at odds with the vocals and this comes without or because it is death metal-lite, but either way I am loving this track.

It was when I got to Dead Religion that I started to feel like this album was almost formulaic – cool quote, bash the drums, guitarist strums to beat and all with some deep-down vocals screaming no one knows what. The things that make this album not so predictable are the little things track-to-track, like the guitar solo in Dead Religion.

The track that should only be played live is Decapitated Disciples simply on account of the way that it ends – you could trail that mo-fo for as long as you wanted. Generally, a pretty awesome track, but again the vocals ruined it. Love the round-robin nature, and the slow down towards the end, but the vocals seriously hinder it.

After almost falling asleep to Crucifixion Infection, I realised it was bed time. Also that this track is another example of the formulaic feel mentioned above. Love the quote from Sin City though.

Closing the album is the all-out Angels Decayed In Dust. Random duet and the piano riffs are what made this track for us, but it feels like they knew this track was going to be the last on the album so they put everything they had into it. Not bad at all.

Overall this album is a good album – I did mentioned particular faults with the vocals, but that comes with the territory. Since marks can’t be reduced because due to lack of enthusiasm for the genre, comments are to be made about each tracks individuality – it is very easy for each one to become lost in an album of this type, so it is really good to be able to sit back and be able to tell them apart. We like, which is odd.

You can now find TTFA on Facebook by clicking here