Tragedy turn disco bangers in to metal anthems in Newcastle 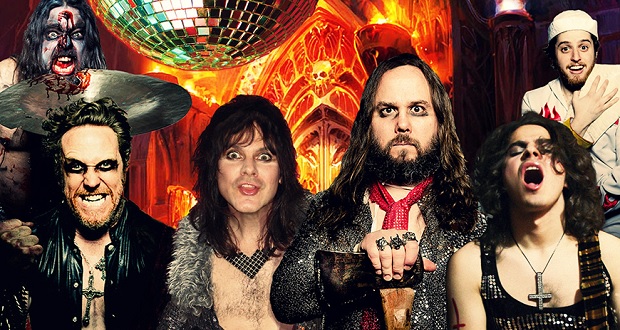 When you pay for a cover or tribute band, you pretty much know what you’re going to get… all your favourite tracks from the band they are emulating. But this is not the case with Tragedy!

The bands full title is ‘Tragedy: All Metal Tribute To The Bee Gees & Beyond’, yes you read that right… an METAL tribute to THE BEE GEES. Y’know ‘Saturday Night Fever’ and all that. The New Yorkers have been around for a few years now and exhausted all the top hits of the Gibb brothers so their set generally includes other covers of the same ilk. In a classic metal style mind you. This tour is promoting their latest album Tragedy Go To The Movies, which is full of sound-track… tracks.

Wasting no time we are greeted by a guitar led version of the Universal Studios theme, followed by camp classic ‘Fame’. Tragedy makes sure we remember their name, ensuring us with their ‘title track’ (‘Tragedy’ if you hadn’t guessed). This kind of underlines that they aren’t the most serious of bands. Not that anyone expected that. Saying that an older couple left early because they must have expected three guys in white suits with dodgy hair. Sorry. Maybe they should have left this until last because it gets the biggest reaction complete with fans in AC/DC t-shirts doing the Steps dance.

By this point, everyone is already having a wonderful time. We are at Trillians, an iconic rock bar which has hosted many a legend in Newcastle over the decades. The Bee Gees are probably the hard rock band that never were, it only takes covers of ‘You Should Be Dancing’ and ‘Stayin’ Alive’ to realise this at the very least.

Highlights come in a Slayer-esque version of ‘It’s Raining Men’ (The Weather Girls), ‘You’re The One That I want’ (Grease) and ‘9 to 5′ (Dolly Parton). Strangely this style doesn’t always translate ‘Skyfall’ (Adele, or ‘A song by James Bond’) doesn’t really get much of a response and they close with ‘Aquarius’ (Hair) which is fine but falls a bit flat as everyone leaves to avoid traffic. A few Abba covers and a few more movie songs would have probably been a better bet.

Overall, Tragedy has joined the ranks of Steel Panther and ArnoCorps as one of the most fun bands to experience live. Their nods to metal classics also highlight their love for this music. Let’s hope these guys come back again soon with a new bunch of ‘disco-metal’ bangers in toe.