December is the year where we all get swamped by gigs, it’s what makes the month that little more special, and it is always a great way to catch up with friends one last time before everyone suffers the struggles of huge hangovers and family gatherings the next few days offer, even more so when it is a huge gig.

Dreary, wet weather tries to taint the mood as it pours from the skies of London, but it would be only the first of many hurdles that would be in the way of the our job of the evening, nonetheless, we fight the hustle and bustle of the big smokes crowd to get our way south of the river to the O2, then cue up the second hurdle of the night, of all the box office windows, why have only one open handling both guest and press lists?! The cold, wet wait cost us the chance to get in and catch The Raven Age, a band I’ve not seen since their tour support of Anthrax a few years back, they’ve put in the time and work many stages, but to be opening the O2 arena would have been a set I’d love to have caught! Some you win, some you lose I guess. 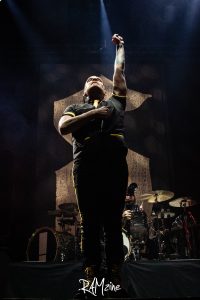 Despite the tough luck there, it’s a great chance to get to see some familiar, and new faces of our photography family, as it turns out, without these faces, the night would have been an absolute write off! With a few of us not seeing each other since Bloodstock, it brightened our gloomy starts, and as luck would have it, another of the nights heroes is the bands PR who shows their face. We are prepping for Shinedown, and with us also there to review, we fully anticipated the regular issue of leaving the photo pit and entering the venue to get something to write about. Our first three songs are a real healthy wedge into the Shinedown set, they don’t mess about, energy and enthusiasm, they do enough to make even the most grinch-like of people engaged and paying attention from the off. Continuing the push the crowd as far as they can, they get the venue to greet the strangers left and right as our neighbours for the night to embrace the show as one, during which time, vocalist Brent Smith takes the time to come down and shake our hands also before the regular stunt of splitting the crowd to jump in and make his way through. Even if you aren’t a fan, it is hard to not enjoy the show, they’re a band unlike any other and the proof is in the pudding. Courtesy of our PR hero for the night, we are straight back into the venue to catch the set, not being familiar with the band personally, it helps they throw in an impressive stripped back cover of ‘Simple Man’, with that, the t-shirt cannon, the appreciation of the fan base, it is difficult not to even imagine the Mona Lisa grinning ear to ear. The tour cycle coming to an end for ‘Attention Attention’, they won’t be too far off coming back with something else and no doubt, looking to hit stages of a similar size on their own headline tour themselves.

It seems the good times are drawing to an end as we find ourselves rushing off to get set for Alter Bridge, our lovely security pit escort takes us through for the very last time as we walk into a very darkened O2. Portrait screens are mounted all along the back with the top half angled in overhead of the drum kit, enough to throw you off a little standing as close as we are, but its clear we are all in for a great show. The intro starts and we see figures walking through the black, the cheers erupt around the venue as the show blossoms into fruition, kicking off with their latest album opener ‘Wouldn’t You Rather’, the sound is perfect, with guitar melodies and riffs blended seamlessly while Myles impressive tenor voice soars overhead. Brian spends much of the time towards the back of the stage keeping Scott somewhat company behind the obliterating drums. They throw back into ‘Pay No Mind’ from their sensational release Blackbird before returning again to Walk the Sky with ‘Ghost of Days Gone By’, the tracks work effortlessly together as the band seems to have gone through album after album, always progressing but never changing, it all feels timeless. The excitement is infectious and emphatic and we can’t wait to drop our gear off and get back in there for the show… Here begins our true nightmare! Now while we completely will not complain that security are there to do a job, and a fantastic one they do, the rules in which they must work by seem to always change… expecting to drop our gear (which combined with many of us returning photographers is well into the thousands) with security at the desk to then get in for the show, we were told no. A lengthy debate then ensued and again when we get the manager of the night out with us. Again, yes they are just doing their job, but we also have a job to do, and we simply cannot do it at times despite earlier in the evening all seemingly being OK to do what we had planned as we have many shows for years previous. We eventually get told to drop our gear at a bag drop off… whom expect us to pay ten pound to have it thrown in a storage container outside… not exactly ideal! But with some rushing back to cars and others giving up, we manage to find ourselves some solutions and get into the show. By this point the bulk of the set is over, we walk in around ‘Cry of Achilles’ and ‘Waters Rising’.

Despite our frustrations, it all is temporarily forgotten as we get treated to a stripped back song, ‘In Loving Memory’ which gets the acoustic treatment with only Mark Tremonti on the stage sat beside Myles singing perfectly with the displays giving us a gentle raindrop show. The acoustic show continues into ‘Watch Over You’ with Brian and Scott bringing themselves in halfway through, for all the material they’ve made, it’s those two first albums that do it for me, but by this point there’s the inner battle of impending cancelled trains to contend with, so I soon make the difficult decision to share my hugs and farewells with the gig family I’ve spent my time and frustration with. Getting to hear the stripped back early material is a highlight, but knowing full well that their epics like ‘Blackbird’ and ‘Metalingus’ were still to at least come made it a bitter sweet decision. News soon comes through on my overly packed last train that despite Sevendust having to pull out for health issues within the band, John Connolly has made the trip and joined for the set closer Metalingus, just my luck!

A night of great fun, laughs and memories with some of the greatest friends in the industry, marred by some really stupid rules set up by people that are nowhere to be found… It isn’t how I’d intended to spend my last gig of the year, but it wasn’t all bad! One thing is for sure, if not for those photographers and the amazing PR, the night would have been much worse and I very much doubt that any of the bands would have been seen to write about. Hopefully next time we will have much better luck and be able to give the review we wish we could for the bands that have more than earned it!