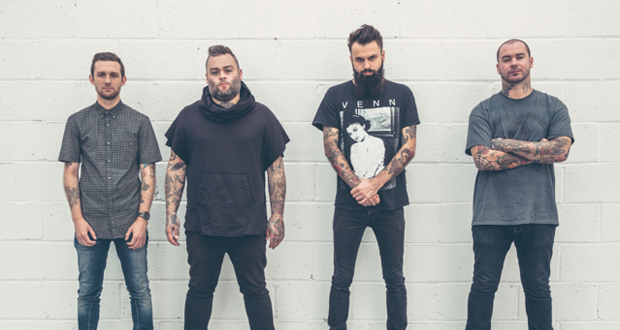 With Wade MacNeil joining Gallows after the departure of mayhem provoking front-man Frank Carter, there was huge anticipation for their first release. Thankfully the line-up change and addition of the former Alexisonfire guitarist on vox did not mean Gallows were all change. For sure, the vocals were different but Gallows retained the energetic and raucous punk sound that had previously led to their popularity and the critical acclaim of their first two studio records. In 2012 they released an eponymous studio album, and their third to date. Wade and the boys (Stuart Gili-Ross (bass), Laurent ‘Lags’ Barnard (guitar), Lee Barratt (drums) laid down a heavy, musically aggressive and gnarly album – just what the doctor ordered.

Fast forward to 2015. Having now extensively toured and smashed both new material and older Gallows favourites live, they remain one of the finest punk bands around. Brother of the former front man Frank, Steph Carter’s departure from the band in 2013 provided a potential problem and chance of deviation from the signature Gallows sound. This has not been the case, and hats of to them for this – the now four piece are keeping what is great about Gallows going and are set to release new record ‘Desolation Sounds’ on May 13th.

Swagger, attitude and menace are the tools of our trade,” states guitarist Laurent Barnard, summing up what Gallows means in 2015 in three simple words.

If you can’t wait.. check out the video for new ‘blow your face off’ track ‘Mystic Death‘ for a taster what is to come on the album and in the sweaty pits (no pun intended) of U.K music venues.

Gallows will tour parts of the U.K this spring with Baby Godzilla and are set for Carnage at this years Slam Dunk Festival!