Gamma Ray release stunning live performance in HD on 2CD, DVD and Blu-ray via earMUSIC on the 3rd December 2012 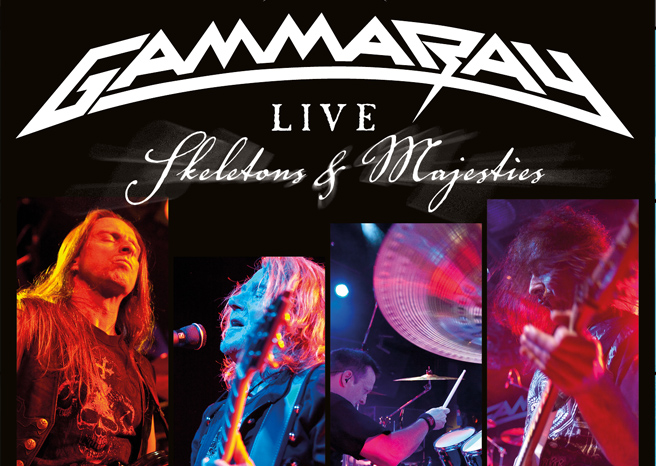 Gamma Ray ‘One of Germany’s biggest names in Heavy Metal’ are to release a new HD 2CD DVD! The DVD titled ‘Skeletons & Majesties Live’ features the live recording of the band’s performance at the legendary Z7 in Pratteln, Switzerland from April 29th, 2011.

The DVD (also avalible in Blu-ray) will feature additional bonus tracks, lots of behind the scenes bonus material, rare archive material and interviews with the band.

“Skeletons & Majesties Live” has a playing time of two hours and is a tour de force through the band’s history so far, including lots of hits and classics, but also tracks which were undeservedly under-represented to date.

The double CD includes a total of 18 songs (plus intro & interlude). The DVD and Blu-ray will feature six additional bonus tracks with alternative versions of ‘The Spirit,’ ‘Wings Of Destiny,’ ‘Farewell,’ ‘Gamma Ray,’ ‘Time To Break Free’ and ‘Insurrection,’. These additinal tracks were all recorded at another show at the Zeche in Bochum, the day before the Pratteln show.

“The EP, Skeletons & Majesties, is practically a continuation of our ‘Skeletons In The Closet’ concept, in other words: new versions of songs which didn’t receive the attention they deserve, as well as unplugged versions of some of our classics,” says Kai Hansen, the band’s vocalist, guitarist and founder.

See the first released scenes from the DVD here: