Joe Satriani Reveals What Happens Next 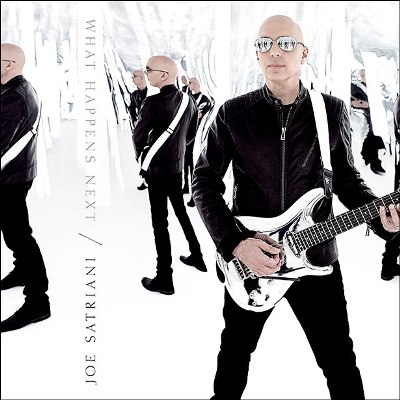 Guitar virtuoso Joe Satriani’s profile is set to skyrocket as a number of projects take flight over the next few months. These include a new instrumental album, What Happens Next, a new G3 tour over in the USA, plus documentaries and memoirs.

What Happens Next will be Satriani’s sixteenth solo album and is scheduled to be released on 12th January 2018 through Sony/Legacy Recordings. It features producer/engineer and mixer Mike Fraser, a frequent Satriani collaborator since the release of the Crystal Planet album back in 1998 (Fraser having recorded/mixed every AC/DC album since 1990’s The Razors Edge). However, what’s most interesting is that the album features a power trio consisting of members from two of the most successful super groups of the last decade.

Joining Satriani on What Happens Next are Roll & Roll Hall of Fame inductee bassist Glenn Hughes (Black Country Communion, Deep Purple and Black Sabbath) and drummer Chad Smith (Red Hot Chilli Peppers) reuniting with the guitarist for the first time since they worked together in Chickenfoot.

This new rock family tree has further roots in the past  – Joe Satriani stepped in to tour with Deep Purple between 1993-1994 after Ritchie Blackmore left (prior to Steve Morse joining), and Chad Smith (a big Purple fan himself) has performed and toured with Glenn Hughes in the past. While the probability of the trio doing anything other than this recording together seems highly unlikely we can’t wait for such wild speculation to take hold.

The day before the album’s release, on 11th January revives his G3 Tour for a run across the States starting off in Seattle, WA and setting down in Milwaukee, WI on 25th February. Since debuting in 1996, Satriani’s G3 Tours have featured the world’s greatest guitarists (everyone from Steve Vai and Eric Johnson to Steve Lukather and Robert Fripp) and has become a consistent concert hall sell-out attraction in the USA, South America, Europe, Australia and Japan.

“I could say that I’m surprised at the durability of G3 and how much it’s grown, but in a way I’m not,” Satriani said with a laugh, “I think part of its charm and its mojo is in the chemistry of having three top guitarists share what they do on stage. It’s fun, it’s unpredictable, it’s wild – It’s everything you could want in a show.”

Sharing the stage with Satriani this time round will be Dream Theater’s John Petrucci and Def Leppard’s Phil Collen. No announcement UK or European tours have as yet been made.

Prior to these events, a new documentary Beyond the Supernova shot by Satriani’s filmmaker son, ZZ, premieres at the Mill Valley Film Festival on 14th October chronicling the guitarist’s Shockwave Supernova tour throughout Europe and Asia, and a paperback version of Satriani’s Strange Beautiful Music: A Musical Memoir first released in May 2014 will go on sale as of 7th November, although it can be pre-ordered. The book will be brought up to date, including a chapter on the recording of What Happens Next, with a sample excerpt available for reading by clicking here.

What Happens Next features the tracks ‘Energy’, ‘Catbot’, ‘Thunder High On The Mountain’, ‘Cherry Blossoms’, ‘Righteous’, ‘Smooth Soul’, ‘Headrush’, ‘Looper’, ‘What Happens Next’, ‘Super Funky Badass’, ‘Invisible’ and ‘Forever And Ever’ as you can find out for yourselves on 12th January next year… And you can pre-order it by clicking here.