Will the real Samantha Fish please stand up? On previous recording we’ve had country rock, Mississippi blues, songs that rock out and lingering love ballads.Live she can be a tour de force (Ignore those i-Phone Youtube videos, they don’t do her justice), she’s got a voice that can roar like a female version of a young Robert Plant to something so sweet and gentle you could hardly believe. Her guitar playing similarly soars, screams and does unspeakable things to tempt you.

This is all without getting into the personality behind the songsmith. Here on Kill Or Be Kind she delivers a coherent bunch of tunes, playing in the same wide ballpark. How much reveals the truth and how much is the fictional persona she’s created, we are still none the wiser.

To be true there are mostly songs of love. Ones besotted where she’s got it so bad, others where she’s leaving you stone dead. The characters she portrays when delivering these renditions might be totally dysfunctional or simply acknowledging lives damaged by bad turns of fate. Mixed-up, compelling, not a badly bruised apple among the bunch.

The album leads off with the single ‘Bulletproof’ – in fact there’s both a Tangle Eye mix and a radio edited version on my review copy – A repeated riff sashays forth, incessant, unrepentant but coy, beating hard in the chorus. The piece moving between softer and heavier sections with some manic slide soling tucked in the middle. She sings in sighed awe, lyrically veering between the subtle and the savage.

The stage is set. It’s a statement of intent but do we believe her?

The title track is next and its opening lines tend to reinforce the character: “Back before I was a home wrecker, I was a goodie-goodie good girl.” It’s slinky, sexy R ’n’ B soul that burns like the devil. Brass horns support sympathetically, before a guitar stirs up in brief frenzy that is met by her screaming voice and then a softer moan. It’s gorgeously chilled.

The temptress continues with lines like “You and I we could rule this world together,” in the modern laidback R ‘n’ B funk with coy harmony vocal that is ‘Love Letters’. It gets meatier in the chorus, a guitar nudges suggestively throughout, horns rise and fall, and there’s a dirty rock guitar solo just to make sure you don’t fall into sensual slumber.

With a radio edited version also available ‘Watch It Die’ gives any blurry-eyes a reason to stay awake. Powerful racing metronomic riffed, that fades out in a slow whispery afterglow. Drifting naturally into ‘Try Not To Fall In Love With You’ a pretty but sad lullaby blues that in its extension echoes where the blues met southern rock.

Next up, ‘Fair-Weather’ is a more gentle R’ n’ B with added rock ‘n’ roll fire in the solo. Here her voice comes across in the manner of more pop-orientated singers like Duffy, Adele and Amy Winehouse in that non-plussed seen it all before manner but this time you know it’s for real. That is until the moment she comes on like Robert Plant with vocal histrionics you’ll swoon over.

There’s rockabilly with a nice R ’n’ B shuffle going on in ‘Love Your Lies’ as an ace horns and some crackerjack drumming offers support. It’s like some long lost female vocal group number then things go distinctly left field with a surf guitar solo.

Another song that has her harmonising with her own voice is ‘Dream Girl’. A whimsical country styled folk tune with a lyrically ambiguous tone that gets darker the more you play it. Opening with brassy soul ‘She Don’t Live Around Here’  initially feels like the voice of a girl bruised by love but then it appears less to be not quite in regret but a summing up of good times that were not quite good enough and now it’s time to move on. A quiet highlight. And here, as elsewhere on the record, the accompanying organ playing is gentle throughout, brushing the edges of the hurt in the songs comfortingly.

‘Dirty’ is a slow bluesy soul, about how her lover makes her feel. Yet again her guitar suddenly roars out full-on followed by a screaming vocal, both pure orgasmic.

‘You Got It Bad’ operates more in that lived traditional manner she has. Muddy Waters deep-down-in-the-Mississippi blues with a trip hop underflow, with brass hitting it hard on the choruses, bombastic slide solos, cool backing vocals, and swerves and peaks in the movements in between. It doesn’t so much leave you wanting more as taking the mature choice to play the whole thing again.

As a work, it offers variety while being presented cohesively. If the album as a whole has a story to tell it is that of a bad girl who may not have been as tough as she makes out, yet licking her wounds she will fight on another day… But I could be wrong, the title is after all Kill Or Be Kind! 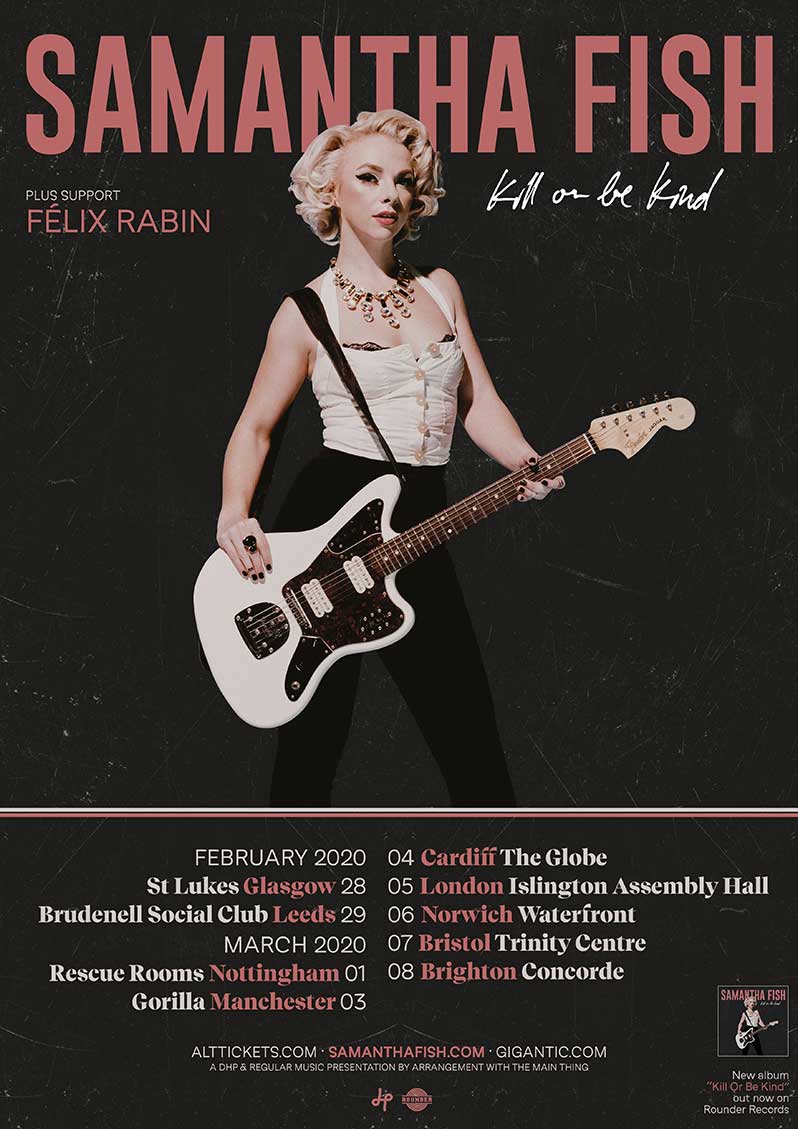