Devildriver – Outlaws ‘Til the End 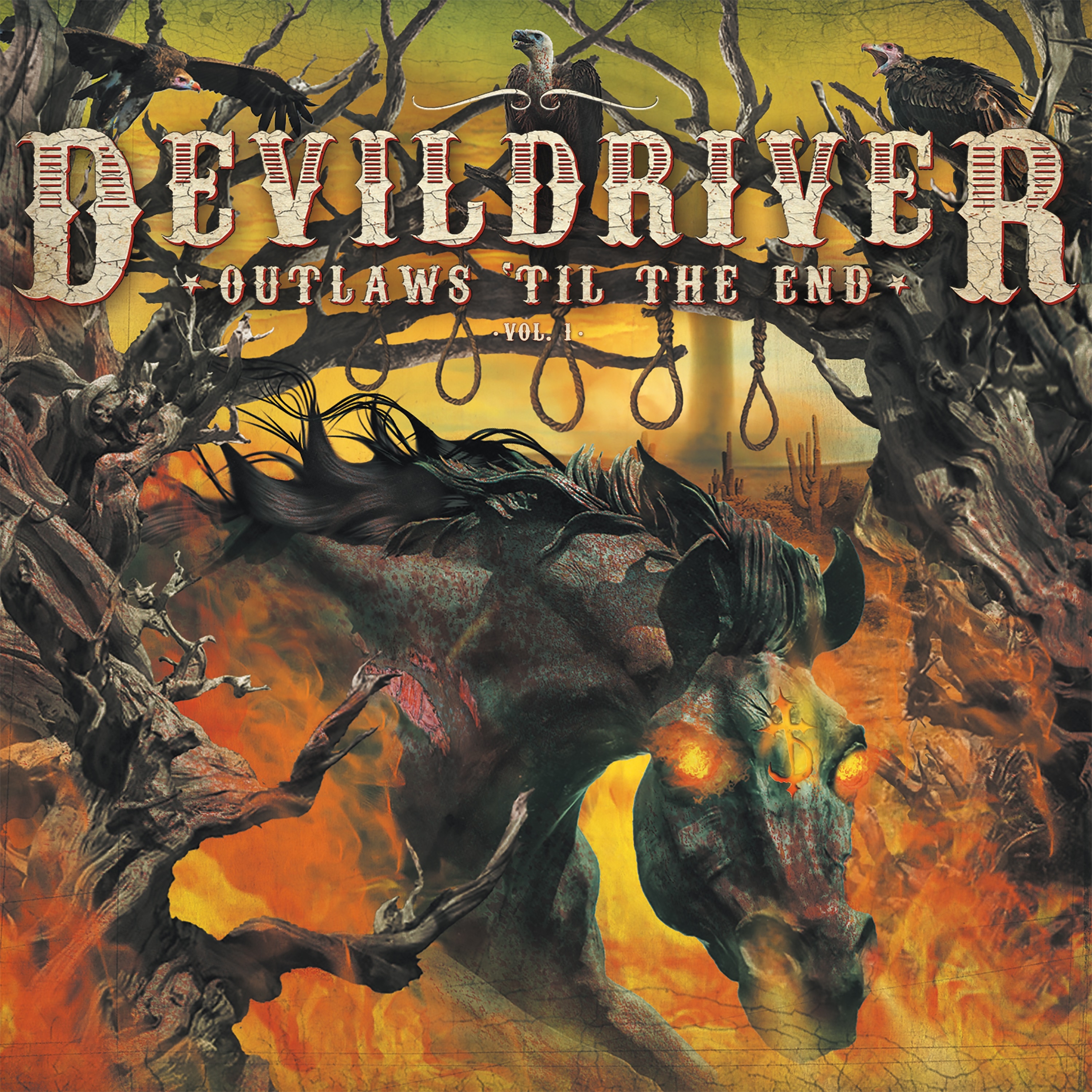 First off, I won’t lie or hide it, Devildriver I’m not into, I love the style of music they play but they just haven’t ever done anything for me, it’s the way it goes sometimes. We all have those bands that we just don’t get why there is so much hype about them. Sometimes you catch them live at a show or festival and it then clicks or makes sense, sometimes it doesn’t. So when a new album comes your way by such an artist to review, you hope it brings something that has that X factor or element of surprise that can change your mind.

From the outset, I remember when they announced the album, a covers album of country songs. Slightly intrigued at most, I was interested to see what artists they’d cover and nothing more. I didn’t hold much hope for it but I also didn’t scoff at the idea, it’s a little different from a generic covers album which is refreshing. Not shy on the talent side with guests either, the light of hope shone a little brighter to me, however I didn’t expect the onslaught that came from the beast within.

Completely cut throat, this is pure Devildriver, if you weren’t to know it was a covers album or the original artists, you’d probably be none the wiser. It kicks off with none other than ‘Hank Williams the Third’, if you don’t know who he is, give yourself an education, he is a Man among men in the southern metal world, and it sets you straight up for the rest of the show perfectly. Keeping up the intensity follows a Willie Nelson track with a certain Mr. Blythe guesting, the contrast in vocals between Blythe and Fafara bounces off each other ferociously, the harshness strips back the country sound with only a fleeting few moments bringing that style through. ‘Outlaw Man’ however remains rather true to the Eagles original, but it doesn’t shine much of a light to what is effectively the show piece of the album. Originally by Stan Jones, ‘Ghost riders in the Sky’ is going to be one almost everyone will recognise, it brings in plenty of guests, its heavy flair seem to have it sounding more akin to Swedish melodic death metal bred with Irish rock, different yet familiar, it plays fantastically.

Covers of Johnny Paycheck and George Jones soon follow suit, and you can’t have an Outlaw covers album without a track about drinking hard, and who better to guest than the man Wednesday 13. An absolute belter follows in what should be the most recognisable on the album when ‘The Man Comes to Town’.

Rather than peaking early, the talent keeps pouring like a fine bourbon (or maybe a cool sarsaparilla considering Dez’s sobriety) and stays strong for the next few songs, even the mellow (if I dare use the word!) ‘A Thousand Miles From Nowhere’ doesn’t hold back the punches. I find myself more than happy to recognise album closer ‘The Ride…’ by David Allen Coe, without that man the metal scene wouldn’t be anything like it is, my first real ever taste of him came with Rebel Meets Rebel (another must listen country-esque metal release with a few familiar names in). A sensational way to finish the album that left me a little unable to find the words, even after a few listens.

All in all I went in possibly intrigued, but not all excited, I know a little country, I know my metal, not often do I find the two mix together as well as this. After all these years of hearing Devildriver and seeing them live, to never have captured that spark the majority of others seem to have, I was expecting this to go by like a flash in the pan at most. I’m more than happy to say I was proved wrong though! I have even attempted to revisit the bands back catalogue with fresh ears after it. Maybe we will see some of this at Bloodstock in a few weeks, there are some of the guests from the album performing there too, maybe we will witness something really special, if this album is intended as a tribute to the true outlaws of the music world, then they have done one damn fine job! Find yourself an hour spare? Treat your ears to something a little different, it’s worth every minute!