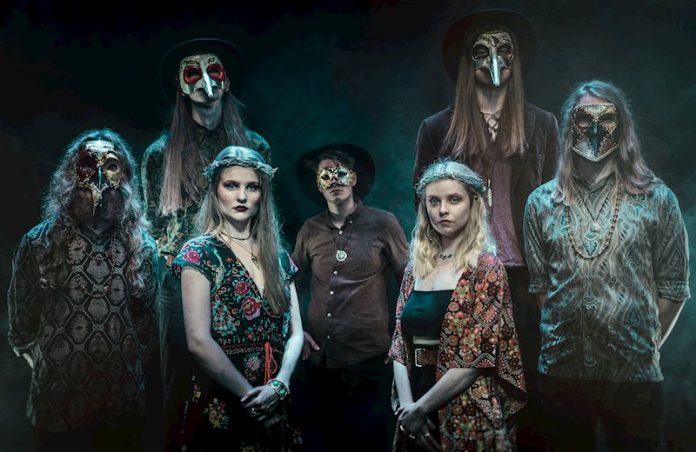 Nephilia is the Latin name for the orb weaver spider and suits the band of that name perfectly, as they also weave a complicated web — albeit made of sound, although occasionally silk too. However, this Nephila is a Swedish psychedelic rock band of seven, five of whom seem to wear strange yet compelling masks and manage to blend ’60s and ’70s rock, with hints of folk and a dash of theatre. With two celestial female vocalists on top of the orchestrated rock, they could be described as Heart does Uriah Heep, but with the odd Scandinavian pop reference here and there.

Opening with ‘White Bones’, the drum intro builds into a guitar riff of quality before the vocal sweetly takes centre stage with a great bass-line. Then, after a crescendo, the time signature changes neatly for vocal duetting. I love the whole album, but the notable highlights include ‘Who Are You?’, the subtle, brilliant distillation of 60s rock of many kinds (Kinks, Yardbirds, Cream) of ‘Mushroom Creatures,’ the Deep Purple hued ‘Guidance To Agony’, and the masterpiece of nine plus minutes, ‘Alla Galaxers Centrum,’ which means apparently “centre of all galaxies”. Even though this one sung in Swedish, it continuously enthralls as the gentle first section builds into a prog rock soundscape that Uriah Heep or Jethro Tull would have been proud of (and I pick up another Kinks reference too)…marvelous.

Seven songs and thirty-six minutes are more than enough to convince me that this is a band with ’60s and ’70s rock as a base, but with up to date sensibilities and attitudes. All of this should translate brilliantly live and I look forward to their UK appearances when the lockdown continues lifts.

Nephila will be released on 4th June via The Sign Records.